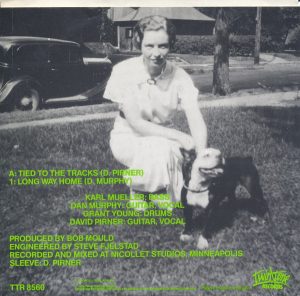 By that time, of course, both The Replacements and Hüsker Dü had already deeply invaded my soul, and — despite being produced by Bob Mould — nothing on Say What You Will… or the follow-up, 1986’s Made to Be Broken totally floored me. There were some really good songs on those records, like “Religiavision” and “Tied to the Tracks,” but nothing really killed me until I heard the b-side from the “Tied To The Tracks” 7″, Dan Murphy’s “Long Way Home.”

And you know why I loved it? Because it sounded like a great lost Hüsker Dü song. I’m shallow that way, OK? In 1986, Hüsker Dü were such towering giants that I gravitated to just about anything that stole their formula of pretty melodies tied to scorching guitar. I guess I still do, don’t I?

You’ve got eyes but they can’t see
What’s inside a tv and they never look at me
You won’t know and you’re never claim to show
That special feeling inside
Oh how time flies when its got nowhere to go
Up to the skies and it only goes to show
I’ve waited here for you a long, long time
I think i’d better go

It’s a fucking whirlwind, to the point where you might not even notice the title being chanted in the background as Young fucks with the beat on his hi-hat and snare, leading into pretty much nothing but drum rolls as Murphy and Pirner trade off vocals in the second verse.

After an utter explosion on “got no more to sayyyyyyy” into a straight beat where everybody in the universe — I’ve always thought I heard Mould in there as well — chants the title over and over.

Fuck yeah!! Originally relegated to a b-side, “Long Way Home” showed up on early CD copies of Made to Be Broken, and eventually became part of the official running order of the album.

And for me, while I was on the fence about Soul Asylum at first, “Long Way Home” proved to be so undeniable that I had to pay attention to Soul Asylum moving forward, and as you’ll see in the next few days, most of their records had at least one song that utterly killed me, even if they never made an album that I loved start to finish.