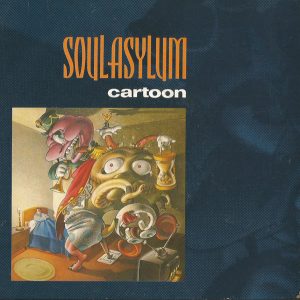 For a couple of years there, I thought that “Long Way Home” was going to be the only song by Soul Asylum that I loved, as nothing from their next record, While You Were Out — their second album in 1986 — really resonated with me.

And in fact, I’m absolutely positive that I dropped the needle on 1988’s Hang Time when it got to KFSR and didn’t find anything I liked either. It was only after I saw the video for “Cartoon” on 120 Minutes that it jumped out at me. But it really really did.

Like “Long Way Home,” “Cartoon” was written by Dan Murphy, but “Cartoon” isn’t nearly as a much of a raver as that one was, though that’s only relatively, as it starts with sum shimmering guitar from Murphy and Dave Pirner, a bass counterpoint from Karl Mueller and drummer Grant Young hitting his snare on every other backbeat and a good old straight-ahead beat throughout, giving “Cartoon” a stumbling woozy feeling.

Meanwhile, Murphy and Pirner are singing together in gorgeous rough harmony.

Did it almost make you feel that something’s gotta happen soon?
When you wake up feeling lost in your own room
If you’re crying in your beer you’re gonna drown
If you think we’ll rise above, you better look around, you’ll see
It’s a mountain made of sand crumbling under me

There’s also a cool part where Pirner and Murphy sing counterpoint vocals instead of harmonies over Young’s half-beat, which is weird and startling, and when Young steps it up again and they start harmonizing again, it’s probably my favorite part of the song.

Did it almost make you feel that something’s gotta happen soon?
You’re in the movies now and I’m in your cartoon

And while I have no idea what “Cartoon” is about, I just love how it sounds, especially at the end of the song, Murphy takes a long, melodic solo, and they add some organ and what sounds like bells even and “Cartoon” gets bigger and bigger.

Hang Time was the first Soul Asylum to be released on A&M, as Soul Asylum followed their friends the Replacements and Hüsker Dü to evil major-label land, though I don’t really think it affected their sound. At least on Hang Time. And it certainly didn’t affect their commerciality, as Hang Time didn’t even chart, and to be honest, at the time there didn’t seem to be any reason to expect Soul Asylum to be more successful than any of their peers.