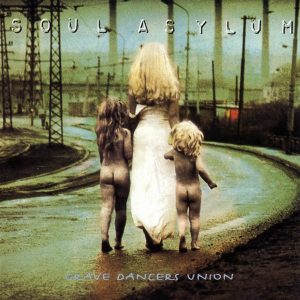 I mean, the time was right: Grave Dancers Union came out at the exact moment that Nirvana had blown the doors open for punk rock songs with massive hooks, and “Somebody To Shove” was objectively exactly that kind of song. Not to mention objectively the greatest song that David Pirner ever wrote.

Opening with a Pirner-played electric wire lead hook that gets even more searing as the full band kicks in behind him, “Somebody to Shove” then roars into its first verse.

That first verse, though, is all tension, as drummer Grant Young — though it might have been future drummer Sterling Campbell, who actually played on half of Grave Dancers Union — sticks to his toms, eschewing a normal backbeat while Pirner and Dan Murphy’s guitars rumble over those drums and Karl Mueller’s bass. All of this makes the joyous explosion of the pre-chorus (unless it’s the chorus) that much more release:

And them, wham, back into the rumbling tom-heavy restraint for the second verse, Pirner singing very much with his inside voice.

Hello, speak up, is there somebody there?
These hang-ups are getting me down
In a world frozen over with overexposure
Let’s talk it over, let’s go out and paint the town

Which is exactly what they do for the rest of the song: paint the fucking town every which way, guitars roaring and ringing every which way as they get to the punchline in the chorus (post-chorus?). Oh should I say shoveline?

In the tradition of the ‘mats calling their greatest album Let It Be, Hüsker Dü deconstructing “Helter Skelter” and transmogrifying “Eight Miles High” or even Nirvana mocking of the Youngbloods at the beginning of “Territorial Pissings”, the title of “Somebody to Love” was meant to take aim at the Boomer culture which had been a fucking monolith for our entire lives.

In this case, the title was an updated piss-take on the Jefferson Airplane’s “Somebody to Love“, but with the take that Generation X preferred pushing people around in mosh pits than any of that hippie-dippie crap. And while then as now I was more of a lover and a dancer than a fighter or a thrasher, I still enjoyed the sentiment.

And so the rest of “Somebody to Shove” is mostly alternating the the pre-chorus and the chorus, getting more and more thrilling each time, especially when Dan Murphy comes in on the harmonies “waiting for you to call me” near the end of the song. By that time, Murphy’s already taken a quick dynamic solo just to break things up a bit, and when Pirner reprises his opening lick at the end of the song, it’s just fucking perfect circle of sound.

And, as we all know, “Somebody to Shove” was the breakthrough single by Soul Asylum, following “Smells Like Teen Spirit” into the top 10, and proving once and for all that incredibly melodic punk rock was finally going to t– oh wait, I’m being told that isn’t what happened at all. That said, “Somebody to Shove” did top the Alt-rock charts, which fuck yeah!

I’ll tell you this: I bought Grave Dancers Union in the fall of 1992 because of “Somebody to Shove,” despite the fact that I knew it was going to be maddeningly inconsistent, and sure enough, while I liked songs like “Black Gold” (the second single, making it to #6 on the alt-rock charts) and “Without a Trace” and — especially — the noisy dissonant “99%”, the rest of it didn’t connect, and I put the aforementioned songs on mix tapes and went about my life.

So when “Runaway Train” was released as a single just before the summer of 1993 broke out, and I started seeing its milk carton video on MTV and hearing it on the radio everywhere, it was weird. And it just kept climbing the charts, eventually stalling at #5 in the Billboard Pop Charts (in a true display of alt-rock snobbery, it only made it to #13 on Billboard’s Alt-Rock chart), one better than “Smells Like Teen Spirit.” Sappy ballads uber alles.

And it wasn’t just a success here: “Runaway Train” was top 10 all over the fucking world, and turned Pirner and Soul Asylum into huge huge fucking stars — the biggest flex of which was Pirner dumping his long-term girlfriend in order to date Wynona Ryder — right during that post-GNR pre-Oasis period where the only reaction to stardom was a major public freak-out. Which Pirner did, in Rolling Stone magazine, of course, which we’ll talk about in a couple of days.

If only all of that success had happened with this song, I think Soul Asylum would have been remembered differently.


“Somebody To Shove” Official Music Video