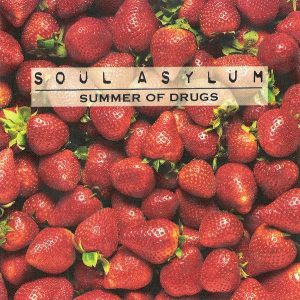 Usually tribute albums — even ones for a single artist — are such hit-and-miss affairs that critic Greil Marcus routinely starts his Real Life Rock posts about tribute albums with “aren’t tribute albums terrible” even if that particular one is pretty good. But with key contributions from Pearl Jam , The Waterboys, Lou Reed, Maria McKee, Lucinda Williams and Matthew Sweet’s immortal take on “This Moment,” Sweet Relief has a reasonable claim on being the greatest of them all.

And it opens with an absolutely fantastic Soul Asylum take on her great Generation X song, “Summer of Drugs,” where over an acoustic guitar, Pirner quietly sings.

And them, with the full band behind him: Dan Murphy on electric guitar — if the liner notes on my CD copy of Sweet Relief is to be believed — drummer Grant Young and bassist Karl Mueller playing each other’s instrument like it was a hootenanny, and the Jayhawks’ Karen Grotenberg on piano, “Summer of Drugs” explodes into an all-time classic chorus.

Oh, we were too young to be hippies
Missed out on the love
Turned to a teen in the late-70s in the summer of the drugs

Mamas and daddies could never understand that life was never dull
Their idea of a rollicking time was a kitchen taffy pull
Acid, grass, downs and speed, junk those days were made of
How could they suspect those kids were monsters beneath their makeup

Preach it! And eventually, Gary Louris and Marc Perlman from the Jayhawks join in, making the final choruses joyous calls-and-responses.


And as Pirner trades off “yeah-yeahs” and “oh-whoas” while Dan Murphy solos at the fade, it becomes a fantastic celebration of generational identity.

After “Runaway Train” had run its course and after “Without a Trace” kinda confirmed that “Runaway Train” was a massive fluke, they did release “Summer of Drugs” as a single and a video — featuring Victoria Williams and some of the other folks on the record — but it only made it to #20 on the Billboard alt rock charts.