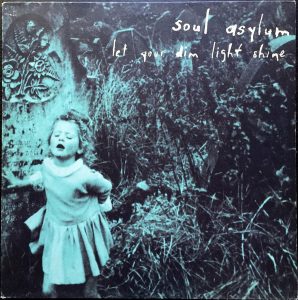 My first jobs in San Francisco were both in what was known as the South Park area. This was in 1995, so long ago that not only did I park in a parking lot that was where the Giants now play baseball, I attended the groundbreaking for what was then called “Pac Bell Park.”

Anyways, one of the nice things about that area was that it had two record stores that were right there on Third Street: one of which was a cool indie store whose name has now escaped me, and the other one was a Tower Records Outlet, which featured discounted CDs that didn’t sell enough in their regular stores.

I spent a lot of time in both stores, as you can imagine, and the Tower Records Outlet was where I purchased Soul Asylum’s 1995 album, Let Your Dim Light Shine, some time after it actually came out. As it turns out, having an unexpected top ten hit and a celebrity girlfriend — Winona Ryder, who you younglings might know as Will’s mom on Stranger Things — had basically done his head in, as was evidenced in an incredibly combative Rolling Stone article.

I just reread that article the other day, and all I thought was “don’t worry buddy, it ain’t gonna last all that long,” and indeed, Let Your Dim Light Shine was the last time Soul Asylum had any kind of success, even sporting their second top 20 hit, “Misery,” which just missed the cut for this project, but I liked way better than “Runaway Train.”

But as good as “Misery” was, it was a deep cut from record, “To My Own Devices,” that utterly slayed me. And not only is “To My Own Devices” a slow one, it’s a really slow one, with the guitars deep in the mix, audible backing vocalists, a beat that was barely there and an opening verse that was kind of brutal.

Shouldn’t’a got so loaded
I damn near exploded
Oh Lord, you know I should’a known it

That verse, though, was followed up by a chorus that was as gorgeous and despairing as anything on Neil Young’s Tonight’s The Night.

The pauses in between Oh please . . . don’t .. leave me … to my own devices just kill me, as does the second verse, which feels like a non-sequitur, but actually inspired the whole song, as a fucked-up Pirner chats up a waitress in Hollywood. As you do.

She was a pretty good waitress
Said she waited on Elvis

Said she talks too much

There’s a great part in this verse where there’s a quick guitar lead in between “said she waited on Elvis” and “said she talks too much” that totally kills me. It’s all so fucking sad, right up to the end, when you realize that way too late for him to to be left to his own devics.

I guess whatever normal people heard in “Runaway Train,” that’s what I heard in “To My Own Devices,” and it surprised me enough that I’ve dropped in here and there with Soul Asylum in the quarter-century since all of this craziness, though only “Gravity” from 2012s Delayed Reaction has really jumped out at me.

“To My Own Devices”