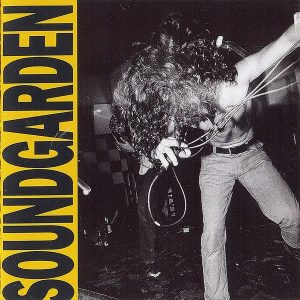 I think that part of it was that I was pretty much convinced that the pre-punk hard rock I loved as a #teen — Zep, Sabbath, Aerosmith, Van Halen et al — had pretty much run its course. And furthermore, what had replaced it — thrash, hair metal, death metal and Van Hagar — wasn’t for me. The fact that I loved Guns n’ Roses & Living Colour and liked Jane’s Addiction felt like they were outliers, when in fact they were harbingers.

And so, I stupidly dismissed grunge when it started rearing its head in the late 80s & early 90s, until Nirvana and Pearl Jam turned me around. And in terms of Soundgarden, it wasn’t until 1994’s Superunknown knocked me for a loop that I started going back and exploring their earlier music.

And while I’m still not a fan of their earliest music, there are several cuts on their major-label debut, 1989’s Louder Than Love, that I like, like “Full on Kevin’s Mom” and “Big Dumb Sex,” a pair of fucksongs that were smarter than they came across. Unless they weren’t.

But the one I really like is “Hands All Over,” where the psychedelia that permeated their later albums comes to the forefront, especially in Kim Thayil’s massive guitar leads, which dominate the mix to the point where Chris Cornell’s environmental warnings get a bit lost.

With soon-to-leave bassist Hiro Yamamoto and merciless drummer Matt Cameron keeping the rhythms both big and springy, “Hands All Over” justifies every single second of its 6:01 running time, getting utterly thrilling every single time Thayil detonates a lead, and it was definitely a major reason Louder Than Love made the Billboard album charts, though it topped out at a relatively disappointing 108.

That of course, would start to change with the next record, as we’ll see tomorrow.


“Hands All Over” Official Music Video