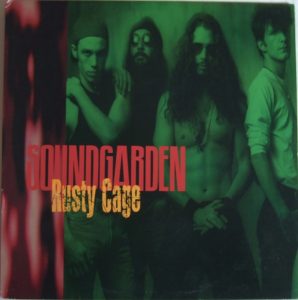 Badmotorfinger is where Soundgarden started to put it all together. With departed founding bassist Hiro Yamamoto having been replaced by Ben Shepherd, Soundgarden got weirder and more focused at the same time, writing — and arranging — songs that earned titles like “Room a Thousand Years Wide” and “Mind Riot;” songs where anytime you listened hard to what any of the four players was actually doing, you’d be like “what the fuck?” while nodding along.

And it probably didn’t hurt that the lead track on Badmotorfinger — an album title that harkened back to Montrose, of all things — was an absolute rager from the start.

“Rusty Cage” opens with Kim Thayil’s electrical barbed-wire guitar flying out of each speaker, forcing you to keep moving lest you get shocked to death while Shepherd and maniacal drummer Matt Cameron both get on their bad motor scooters and ride. Over all of those controlled cacophony a reversed reverbed Cornell starts screaming.

Oh, you wired me awake
And hit me with a hand of broken nails
Yeah, you tied my lead and pulled my chain
To watch my blood begin to boil

Things get really cool as they glide into the chorus.

And then there’s a cool stop-time where Chris Cornell unleashes the full power of his scream.

After that there’s a quick nifty bass solo by Shepherd before Cornell finishes:

After the second time around, “Rusty Cage” comes to a grinding halt for a second, then stumbles to a restart, lurching forward on top of massive Thayil power chords, but never bothering to get any kind of momentum, instead bounding between three different time signatures, trying everything to break out of the cage, but not quite succeeding.

There are no guitar solos in “Rusty Cage,” indeed, the lead instrument is essentially Shepherd’s bass, which is cranked up to Geezer Butler proportions throughout.

“Rusty Cage” was released as a single, and didn’t go anywhere except for the U.K., where it just missed the top 40. It did, however, get one of the 1990’s highest compliments: a Johnny Cash cover. In 1996, Cash — backed by Tom Petty & the Heartbreakers — did an absolutely killer version for his 1996 Rick Rubin-produced Unchained, and Cash’s version was nominated for a Best Male Country Vocal Performance Grammy. He lost — to Vince Gill, who was in the middle of what seems like an excessive five wins in a row in that category — but Unchained did win the Grammy for Best Country album, so there’s that.