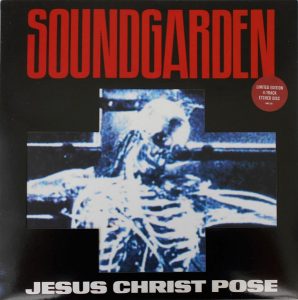 Even though the breakdown of Certain Songs by year don’t yet support it, it has been my long-held belief that 1991 was my favorite year for music. And specifically the three months from September – November of 1991, from when I could easily list two-dozen iconic albums in every possible genre, but instead will just list the ones that would seem to be in competition with Badmotorfinger, which came out in October: Use Your Illusion I&II, Trompe LeMonde, Blood Sugar Sex Magik, Girlfriend Nevermind, Raise, Weld, Bandwagonesque, Loveless & Achtung Baby!. That’s a lot of great music (and the Red Hot Chili Peppers) in just three months!

I mean, 28-year-old Jim only had so much money — even if I was buying most of my music used from Ragin’ Records which was right down the street — and given that I was also working full-time at Video Zone, settling into a new apartment, trying to finally graduate college and restarting Sedan Delivery MK II, I had even less time. And so while I get most of those records, the lack of time & money was probably the main reason I didn’t check out Badmotorfinger until after Superunknown. My bad

Anchored by a ferocious tom-heavy Matt Cameron drum part, “Jesus Christ Pose” is nearly six full minutes of blistering energy, the sparks just flying from the guitars of Kim Thayil and Chris Cornell while Ben Shepherd finds the center of the earth with his bass.

After over 90 seconds of instrumental build-up, guitars ranging from screaming agony to industrial hammering, Cornell finally comes in, breathing fire while he’s taking the piss out of folks he thinks are using religious imagery for their own gains.

When people talk about how Chris Cornell was one of the best singers of my generation, a song like “Jesus Christ Pose” is exhibit A: somehow, while the band is making otherworldly noises all around him, he instantly commands your attention from the opening line, and when his vocal and Thayil’s lead guitar are both screaming “SAVED!” and later on “NAILS! NAILS! NAILS!” over and over again, it’s utterly thrilling.

After that second vocal guitar duel, “Jesus Christ Pose” somehow ratchets up a level by trading all of the noisy dust-kicking guitars for them for good old-fashioned power chords while Cornell howls “in your Jesus Christ pooooooossssse” over and over and it’s absolutely thrilling, just one of the best moments in Soundgarden’s entire career. And for the rest of the song, those power chords just add more power to a song that was already up to 11.

In the end, “Jesus Christ Pose” doesn’t so much end, as disintegrate into itself, having battered and bruised not just us, but the song itself into submission. Fantastic.

“Jesus Christ Pose” was released as the first single from Badmotorfinger, and while it didn’t do anything on any U.S. chart — few U.S. commercial radio stations in 1991 were going touch a song where some dude is screaming “Jesus Christ!” for most of the song, no matter how good it sounded — it did make it to number 30 on the U.K. singles charts.