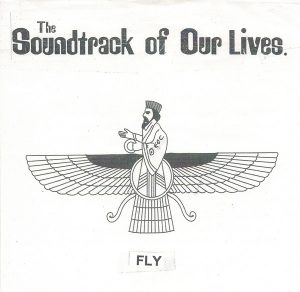 And that’s a compliment, because like a lot of other great covers — Jimi Hendrix’s “All Along The Watchtower,” Hüsker Dü’s “Eight Miles High,” The English Beat’s “Tears of a Clown” — TSOOL somehow remained true to the original while at the same time transporting it to a totally new place.

It goes without saying that Nick Drake’s original version of “Fly” (from 1971’s Bryter Layter) is quiet and acoustic, with a viola and harpsichord — played by John Motherfuckin’ Cale — gracefully filling in the spaces between his voice and the descending guitar lick that runs through the.

And at first, TSOOL honors that arrangement, with the guitars of Ian Person and Mattias Bärjed deftly winding around each other while Ebbot Lundberg sings the opening couplet.

But then, almost instantly, drummer Fredrik Sandsten kicks in with a double-down snare beat, and they start rocking it out as as Lundberg continues.

At this point a soaring trumpet, played by session person Stefan Sporsén, swoops in from heaven, snatches the song and sends it into the stratosphere while Sandsten alternates drum rolls, stop times, offbeats, and every other fucking thing to continually switch things up. It’s powerful and gorgeous.

After that, there’s an amazingly long and amazingly fantastic guitar solo by Person, spewing out of the speakers over a joyful tumble of drums and guitars and trumpet and keyboards, and every single fucking time I hear it, it totally floors me. I can understand why Drake purists might hate it, and maybe even see it as some kind of desecration, but I think it’s about 75 levels of gorgeous.