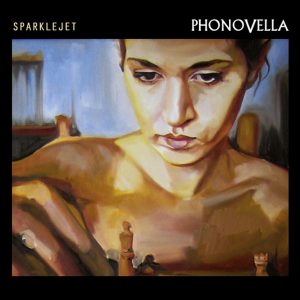 It’s not easy to make records as a truly independent and: you have to scrape up money for studio time and mastering time, not to mention quite possibly pay people to to record and master your album. And that’s on top of your day jobs, partners, family, friends, and a host of other distractions and complexities that life throws at you.

From that angle, it’s amazing that anybody records and releases any records at all, especially as you get older and that youthful drive to conquer and change the world with your music settles into a more mature realization that the world really doesn’t give a shit about your art. Which is fine, because the reason that you still do your music (or, say, your writing) and put it out is because you still give a shit about it, so fuck the world.

And so while Sparklejet’s third record — 2001’s Bar Guest for those of you keeping score at home — was released three years after their second album, the years started slipping away: their fourth album, Beyond The Beyond came out in 2006, and their fifth, Phononovella, in 2013.

And while none of the songs jumped out at me from Beyond The Beyond — its title taken from something Pete Townshend said in The Kids are Alright — it does have a great backstory: singer-songwriter Victor Sotelo; Drummer Wade Krause, Geoff Anderson and their fail-safe engineer Eric Peters all went to Chicago to record with the legendary Steve Albini, apparently a fantastic experience.

The backstory for Phonovella is a little trickier: like Bar Guest, it was conceived as a concept album about family trauma, Mexican immigrants, and how the rich fuck with the poor. BTW, the title comes from when Victor told Don Ramirez the provenance of Beyond The Beyond, and Don wondered why it had to be a reference to anything. So next time around, Victory made up his own word, though it’s probably a play on “telenovela,” as well.

The song “Her Cuts Bleed” should probably come with a content warning, as it’s about how one of the characters in the story deals with her emotional and mental pain: by inflicting physical pain on herself.

She’s worried about glances into her place
But trusting ?he blinds always hide what goes on here?
Her method is clear, through moments of sweet catharsis ?
A steady line, her hand takes the lead

Of course, I didn’t know about any of this when I fell in love with the song: I loved the tension just dripping off of Victor’s grungy guitar chords and Wade’s continually surprising drums, and how it almost but refuses to resolve that tension except for just a couple of bars at the end of the chorus where there’s a guitar/drums interplay that could almost be early Rush, before they added the synth.

Her cuts bleed, but she’s smiling
She’ll get better on her own
She keeps trying to believe there’s something more
Than pain to ignore

It was always such a cool-sounding song, I hadn’t really realized how serious it was, because I was too lost in all of the musical interplay, which is why it’s one of Victor’s favorite songs to play live.