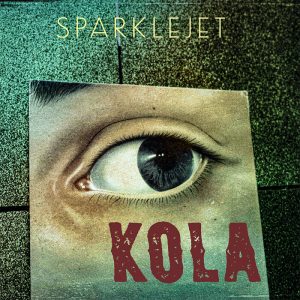 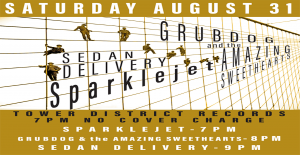 So I suggested that, as we finalized our new records, we would coordinate the releases in such a way that they wouldn’t step on each other, but rather emphasize each other, as part of this unlikely release cycle. It went back to something that I once read that the Beatles & Stones used to do: coordinate with each other so they both weren’t releasing new singles at the same time. At the very least, maybe we could have a couple of big record release parties or something, as we had already played with Sparklejet a couple of times earlier in the year.

I guess we all did.

“At Prince & Elizabeth” actually goes all the way back to 2008. Victor and a buddy, Thomas Medrano, had flown to New York City to visit Jay Fung of The Miss Alans, and on the last day, they went to a restaurant in Northern Little Italy (aka “NoLita” because New Yorkers love doing that shit) for breakfast called Café Habana, which was at the corner of Prince & Elizabeth.

Victor says that he hummed the melody of the song to himself all the way back to California, but when he brought it to the rest of the band, they didn’t like it, so that was that for ten years.

Both Scott & Victor thought my idea to do some kind of combined promotional blitz for our records was a good one. At this point, I’d been sharing our songs with both of them, Victor had been sharing songs with me, and not only had Scott produced the Sparklejet album, he’d been giving me advice about our record, calling me up during the NFC Championship in 2020 saying that our self-recorded songs came out so good, we needed to take the next steps and get it mastered.

Of course, as it turned out, the only record that came out in the spring of 2020 was the Miss Alans excellent Voyeur. Sedan Delivery’s Untitled came out on Bandcamp & streaming services in September, 2020, and physically in June 2021 — contact me if you wanna buy one! — and Sparklejet’s Kola didn’t come out until a couple of months ago, though Victor gave what I think were final mixes last year.

“At Prince & Elizabeth” rides on a bouncy riff, driven by a big rumbling bass from new bassist Chris Estep, who’d been in the Fresno music scene long enough that one of his early bands opened for Sedan Delivery II, and both he and Victor had backed up Scott Oliver on a live performance of Scott’s Thunderbolt 650 project. While Chris was a drummer by trade, Victor offered Chris the Sparklejet bassist spot, and he fit right in, helping to drive the (relatively) poppier songs that were being worked up, one of which was “At Prince & Elizabeth,” which suddenly made sense in this context.

So between the bouncy bass, a typically inventive stop-and-start drum part from Wade Krause — augmented by handclaps(!) and plenty of rolls and builds — “At Prince & Elizabeth” took shape, as Victor told the story of that now long-ago breakfast.

At Prince & Elizabeth, the fashions of NoLita, hear the trucks at delivery time
People coming ’round like bees to the nectar, we remember days of its decline, well fine
Delivery bells chime

At Prince & Elizabeth, hipsters take their menus from the girl with hazel eyes
But classy doesn’t fix the aches in her arches, back and forth in lousy
Second hand
Flat black
Pair of Anne Kleins

One of the things that happened almost instantly as the world shut down in March 2020 was that Kirk & Kassia started a weekly “Dan Pemic Friday Happy Hour” on Zoom.

The goal, of course, was to take the place of the personal contact that we weren’t going to have for the foreseeable future. But because our friend group was spread all over the country — L.A., New York, Portland, Minneapolis, etc — it actually ended up more than just a stop-gap: we actually got deeper into some of our friends lives than we would have had the pandemic never happened, as those weekly Zoom calls became hilarious bitch sessions, serious conversations about the state of the world, and even reports from the frontlines of the unrest that gripped the country in the summer and autumn of 2020.

Anyways, Victor — who we had seen at Kirk & Kassia’s at what I jokingly called “The Last Supper” the weekend after they shut down the NBA and MLB, and we were already doing the early social distancing protocols — seemed off during some of those Zoom calls. I mean, we were all off, to an extent: this was the most unprecedented event in our entire lives, and everybody was dealing with it in their own way. But Victor seemed more off, if that was possible.

Well, as it turned out, Victor thinks he caught an early case of COVID in late 2019 or early 2020, and it turned into long COVID that fucked with him neurologically to the point where his anxieties and depressions basically overwhelmed him, fucking up his mental health to a serious degree, essentially bringing not just the album, but his entire life to a screeching halt. At one point, he even considered selling his instruments and moving away from Fresno.

As opposed to the trenchant observation of the verses of “At Prince & Elizabeth,” the choruses get more abstract, zooming way way out, but still staying catchy as fuck.

I know kingdoms don’t care, when savoring delectable faire
Kings exult and resound, Queens delight in what is found
The realm, that’s what it will bear

And Wade’s drums on “The realm, that’s what it will bear” are Keith Moon-level fantastic, building and building and building before resolving into devastating rolls. In the end, with the bouncy main riff and handclaps spurring him one, he sums it all up with a call-and-response as the song fades out.

Luckily, with time and support from friends and family, Victor got better, and when he was ready to return to the album in 2021, Chris & Wade were right there, waiting for him, and eventually KOLA got mixed, mastered and released. And those weekly Zoom calls are still happening.