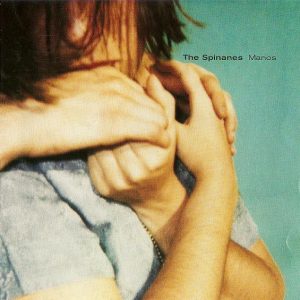 There are two things that when I started doing the research for this post a couple of hours ago that really kinda flummoxed me. The first one is that Manos came out in 1993. But in that weird way that I can normally kinda place when records came out by where I listened to them, I could have sworn it was more like 1995 or even 1996.

That said, based on when I put songs from it on compilation tapes, it looks like I got it in early 1994 — from Ragin’ Records, no doubt — and it was one of those records that was part of the transition from Fresno to Oakland, thus me placing in the mid-1990s.

In any event, The Spinanes were kind of a precursor to The White Stripes in that they were a two-person band with one of the people being male and the other one being female.

Actually, that was pretty much where the White Stripes comparison begins and ends. While the White Stripes commingled Jack White’s big blues riffs & rips and screeching vocals with Meg White’s cavewoman stomp; the Spinanes were both calmer and artier. On their debut album, Manos — which of course in my headcanon is actually called Manos, The Hands Of Fate — Guitarist-Singer Rebecca Gates plays an open, barely distorted guitar while drummer Scott Plouf plays in and around her riffs, resulting in songs that often don’t seem to have traditional verses and choruses, even when they do!

And so, my favorite song on the record is the near-abstract “Epiphany,” in which Gates’s vocals are buried deep in the mix, so you can barely hear her sighing the lyrics.

But I don’t love “Epiphany” for the lyrics: I love it for the two separate guitar/drum duels it contains. The first one, in the middle of the song, features Gates shooting off a sparkling torrent of notes at Plouf while he fends them off wielding his drumsticks like a lightsaber. They like it so much, they do it again at the end of the song, following it with what Plouf trying to run her over with his drum kit, but never quite catching up with her guitar.

Songs like “Epiphany” — and the single, “Spitfire” — are at least part of the reason for the second surprising fact about Manos: not only was it released on Sub Pop, it apparently was the first ever indie label album to top the College Radio charts. In 1993. I read this factoid in multiple places, and yet, it still doesn’t seem possible. I mean, Violent Femmes didn’t top the CMJ album charts? Or Wild Gift? Or Let It Be? Zen Arcade, New Day Rising, Double Nickles on the Dime or Doolittle? Not even freakin’ Daydream Nation?

Anyways, none of that takes away from The Spinanes, who released two more albums and then broke up after Plouf left to go drum for Built to Spill — though their final album, Arches & Aisles was recorded after he left. It just makes me want to go audit every single issue of CMJ from 1978-1993 in order to see if that’s actually true.