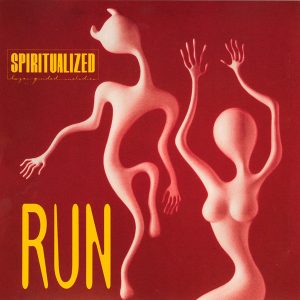 And so over a jaunty bouncy beat augmented by a burbling synth stuck on the “eternity” setting and the usual fuzzy guitar, Pierce starts singing his portmantune:

The Velvet Underground song is “Run Run Run,” from which “Run” gets its title, its rhythm and kinda sorta its chorus.

It’s also catchy as hell, and raises more questions than answers. Like, did somebody dare Pierce to write a song that somehow combined J.J. Cale and John Cale? And how come while J.J. Cale gets a co-write credit, Lou Reed doesn’t? Were drugs involved? Well yeah. And if Jason Pierce was going to cover a J.J. Cale song, why not the more lyrically apt “Cocaine”? Is is somehow because of Eric Clapton? And speaking of cocaine, when I looked up the lyrics of Future Certain Song “Run Run Run,” I realized that I got one of the lyrics wrong: I always thought the chorus was “Run run run / Take a drag of toot”, when in reality, it’s “Run run run / Take a drag or two” making it slightly — only slightly — less druggy.

Anyways, regardless of whether or not Lou Reed is credited or not, what puts “Run” over for me is the chorus, especially at the end when Pierce just chants “you better run run run run run run run away” over and over again.