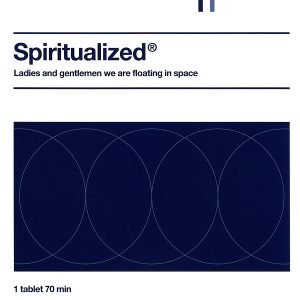 This is where I came in. I’m pretty that while I’d heard Spacemen 3 at some point in the 80s, Spiritualized didn’t really cross my radar until the massive critical acclaim for Ladies and Gentlemen We Are Floating in Space was so overwhelming, I needed to check it out.

And while I would fall short of calling it a masterpiece, it’s where Jason Pierce well and truly added the gospel that had been lurking around the edges of the first two records, a psychedelic gospel rock stew that could be utterly transcendent, like on the too-short-at-8:10 “I Think I’m In Love,” a gorgeous roar of a fucked up song.

Of course, it doesn’t start as a roar. Instead, there is a harmonica gently blowing, a burbling bass and a keyboard tinkling that all somehow constitute a slow beat, as a multi-tracked Pierce murmurs so quietly, you can’t even really hear him.

“I Think I’m In Love” is a drugged-out lost love song of the first order — calling Keith Richards! — possibly written after Pierce found out that his girlfriend, longtime Spiritualized keyboardist Kate Radley, had married Richard Ashcroft of The Verve in 1995, creating a psychedelic Britpop love triangle for the ages: the 1990s equivalent of Eric Clapton stealing Patti Boyd from George Harrison.

As you can tell, Pierce didn’t take it well, and by many accounts — including his lyrics — turned to heroin. As did Eric Clapton, weirdly enough.

But here’s the thing: nobody knew about at the time. Not only did they keep it under wraps — it wasn’t until after both Ladies and gentlemen we are floating in space and the Verve’s Urban Hymms (the one containing Future Certain Song “Bittersweet Symphony”) had both been out for months that the tabloids found out about the marriage.

Remarkably, Radley is on Ladies and Gentlemen We Are Floating in Space, and that’s probably her playing the hypnotic keyboard part that drives “I Think I’m Love” after the drums kick in with an absolutely groovy beat. For the longest time, it’s just the organ dominating the proceedings, until Pierce starts playing call-and-response with himself and the background vocalists as the guitars and horns also kick in.

As always, it goes on and on and on, getting darker and darker lyrically while getting brighter and brighter musically.

In the end, the gospel choir kicks in with the most despairing sounding chant of “I think I’m in love” you can actually get from a gospel choir until the song eventually passes out.

A shortened version — cutting out two of the early verses and the long organ part –of “I Think I’m in Love” was released as a single in the U.K. in early 1998, making it up to #27 on the U.K. charts, though Spiritualized were never really a singles band on any level.