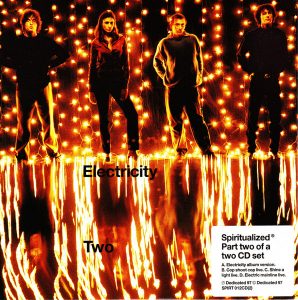 So far, I’ve been writing about the slower — or at best, mid-tempo — Spiritualized songs. And for good reason: on their first two albums, that was all they really had.

That all changed with “Electricity,” an absolutely crazed raver that sits smack dab in the middle of Ladies and Gentlemen We Are Floating in Space , guaranteed to wake up anybody who might have started drifting away on the drugs the album packaging invited you to take.

And so with Jason Pierce’s guitar set for maximum stun, “Electricity” roars out of the gate, driven by that guitar as well as Damon Reece’s drums, thrashing and crashing and bashing underneath Pierce’s fucksong lyrics.

Drivin’ fast down a one-way street
Lord, I love you, you dance so sweet
Goin’ faster, hit the sky
Lord, I love it, don’t ask me why

And without even taking a breath, they all rip into the chorus, Pierce adding even more guitar.

I said, electricity, let it rain all over me
Let the light be forever green
I’m playin’ with fire, if you know what I mean
I need someone to help me turn it on

After each chorus, all hell breaks loose, as Pierce realized that he could also add a thousand overdubs to the fast ones, as well, so it’s not just his guitar, but bassist Sean Cook’s harmonica, Kate Ridley’s keyboards, and 1000 guitars, each one crazier than the last. Eventually, “Electricity” is just a full-blown speedy cacophony of instruments all racing reach other to the end of the song, with the guitars screaming and scratching and warbling just doing anything they can to win the race, which they eventually do.

Speaking of drugs, somebody thought all of this was a good idea for a single, and “Electricity” was the first single released from Ladies and Gentlemen We Are Floating in Space , making it to #32 on the U.K. charts — because it’s a weird country — about par for their 1990s singles.