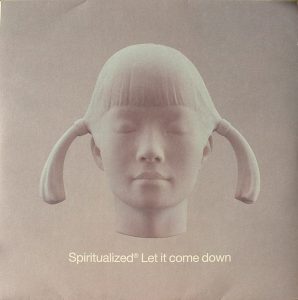 It was, of course, inevitable that Jason Pierce would follow-up the already huge-sounding Ladies and Gentlemen We Are Floating in Space and the subsequent live album Royal Albert Hall October 10 1997 by going even bigger. And so, it took four years and 115 musicians to put together the follow-up, 2001’s More Songs About Jesus And Drugs.

Oh wait, the Home Office is telling me that that album is called Let it Come Down. Sure, but I’ve been waiting to make that joke for 20 years, and sure as shit wasn’t gonna pass it up.

In any event, Let it Come Down harkened to the wall of sound orchestrated by the evil Phil Spector and his protege, Brian Wilson. Check out a song like “Do It All Over Again,” and you’ll find pet sounds all over the place.

Of course naturally, my favorite song was the nearly unhinged rocker “The Twelve Steps,” which finds a chorus of overdubbed Pierce’s snarling over some rip-snorting guitars. And I’ll betcha you don’t need more than one guess as to what he’s snarling about.

If you got the money for a rehab cure
You ain’t got a problem you can’t afford
I was very nearly clean, you know
‘Cause I only had twelve steps to go
The only time I’m drink and drug free
Is when I don’t have to pay for what I need
That’s rare, indeed

And while that first verse is pretty funny, the second verse is anything but.

If your willpower’s weak, temptation’s strong
Lord knows how you’re gonna get along
But the worst thing about your kind of disease
Is you know who can charge whatever she pleases
It’s twenty-eight days for thirteen grand
Better go get myself an insurance plan
She’s my man

At this point, the whole song comes to a screeching halt, and we go to an extended slow part where the guitars disappear and a string section appears. Oh, and also sirens. And the best thing about the sirens is that every single time in the last twenty years this song has come up in the mix while Rox and I are driving somewhere, she always thinks that the sirens are real sirens and not part of the song. Which I guess means that the paranoia Pierce is singing about is getting across on every level.

I ain’t got to where I’m going to
By hanging ’round with people who ain’t my friends
But then again, I ain’t never got
Anywhere I wanted in the end

At this point, the guitars and drums kick back in into noisefest mode and Pierce sings the opening two verses again, after which there is a harmonica solo by either Pierce or Doggen Foster — everybody on this record who isn’t part of an orchestra or choir plays a dozen instruments on it — which continues as Pierce lists the actual twelve steps he is taking.

Somehow, I don’t think that Bill W would approve of this. And you’d think that, after all these years. Pierce writing harrowing songs about battling drug addiction would get old, but not when they remain as darkly funny and purely rocking as “The Twelve Steps.”