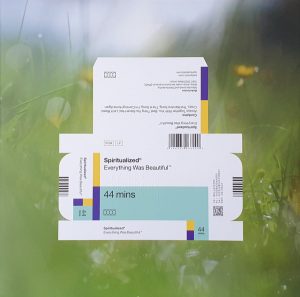 Album: Everything Was Beautiful
Year: 2022

And so just a few months ago, Spiritualized put out their ninth studio album, Everything Was Beautiful, and while it’s always a bit harder to determine instant favorites than it is to have them grow on you over time, sometimes, of course, songs just jump out at you. Like in the case of “The Mainline Song,” the soaring highlight of Everything Was Beautiful.

So here’s a thing: for nearly 20 years now, I don’t really process new music as individual albums, but rather as a big, ever-changing playlist I call “House Mix.” And so when I first heard gorgeous, soaring “ooooooooooh” vocals that dominated the first few minutes of “The Mainline Song,” my first thought was “wow, the Arcade Fire really are back!!”

My second thought, when I discovered that the song with the massive massive soaring opening was Spiritualized, but was called “The Mainline Song” was assuming that it was some kind of lyrical riff on “Sister Ray,” with Spaceman singing about shooting up.

In an interview, Spaceman said that the song was inspired by a combination of his own COVID lockdown, as well as the protests that rocked the U.S. during 2020. In any event, it’s basically that verse over and over again, with an absolutely awesome hook where his voice echoes every time sings “tonight-ite-ite-ite.” Simple but effective.

I don’t know what’s next for Jason Pierce, but whatever it is, I’ll absolutely be listening, because he’s still capable of gobsmacking me.