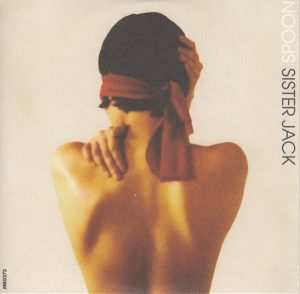 Anyways, “Sister Jack” opens with some cool Britt Daniel power chords ringing and chiming to all heaven while drummer Jim Eno slams down a straight beat and a shitton of tambourine, over which a multitracked Daniel sings:

And it’s that the point he starts singing “Sister Jack” where the whole song changes from the droning guitars to something more groovy, Daniel’s guitar stabbing you in the gut while his bass is doing an approximation of Bruce Foxton’s bass on The Jam’s “Start” — itself a cop from Paul McCartney’s bass on “Taxman,” making it 40 years of psychedelic pop history in a couple notes — while everybody does straightforward handclaps. It’s fucking sublime, to say the least.

It’s so arresting that you might not even notice when they head back to the chiming guitars, especially because in lieu of a guitar solo, there’s what the liner notes helpfully call “sound effects,” just adding to the overall weirdness.

Also adding to the overall weirdness: the outro, which features backwards guitar, more sound effects and Eno tossing in a (I think) 5/4 beat every few bars just for the king hell fuck of it. Deeply weird and incredibly catchy: that’s my kind of song! While “Sister Jack” didn’t make any charts, it — and the funk workout “I Turn My Camera On,” which they performed on Veronica Mars — helped propel Gimme Fiction to the top of the Billboard Indie albums chart and #44 on the main Albums chart.