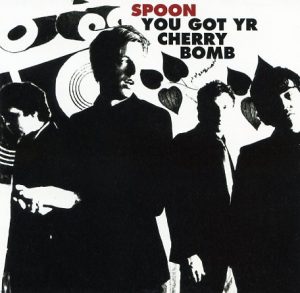 Way back last week, I wrote about how “Take The Fifth” was definitely influenced by Elvis Costello’s soul-drenched Get Happy!!!, and that’s probably one of the reference points for the horn-driven stomper “You Got Yr. Cherry Bomb,” as well.

But there’s a huge difference: “Take The Fifth” was also stripped-down, and “You Got Yr. Cherry Bomb” is anything but, so I’m going to say that in this case Daniel went straight to Motown for this joyous piece of soul, and so it’s all decorated up rather than stripped own.

“You Got Yr Cherry Bomb” is one of those songs that is so full musically that quite literally all of the lyrics I know have “cherry bomb” in them, other than that, I’m listening to the drums, the percussion, the vocal effects (but not the words) and most especially the horn section of Jason Freese on sax, Ron Blake on trumpet and Francisco Torres on trombone.

God damn, I love the horns on this: perfectly placed, not a note wasted, and yet not even the best horns on Ga Ga Ga Ga Ga, as we’ll talk about tomorrow. All of this is even more amazing when you realize that “You Got Yr Cherry Bomb” was originally — or at least alternately — conceived as a country song.

Apparently, “You Got Yr Cherry Bomb” was released as a single, and went nowhere, for reasons that are totally and utterly beyond me.

“You Got Yr. Cherry Bomb”