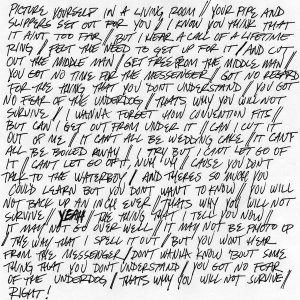 Like a lot of Spoon’s greatest songs, the bouncy, infectious single “The Underdog” covers a lot of ground with a few instruments. In this case, it’s bass, drums, acoustic guitar and — of course — an expertly-deployed horn section.

That horn section — Jason Freese on sax, Ron Blake on trumpet and Francicso Torres on trombone — is there from the opening, but kinda muted, not yet giving away how important they’re gonna be to the song. So at first you focus on the rolling, tumbling opening, led by drummer Jim Eno, who then mostly drops out, leaving Britt Daniel to sing the opening verse over his own acoustic guitar, some percussion and eventually bassist Rob Pope.

Picture yourself in the living room
Your pipe and slippers set out for you
I know you think that it ain’t too far
But I, I hear the call of a lifetime ring
Felt the need to get up for it
Oh, you cut out the middleman
Get free from the middleman

At that point, Eno kicks in and they head into the chorus, which may or may not be Daniel still complaining about how he was treated by Elektra records a decade previously, or maybe just about the record business in general. Either way, it’s as catchy as all fuck.

One of the things I’ve come to realize while writing all of these Spoon posts is that Britt Daniel is a huge believer in The Handclap Rule: Handclaps make good songs great, and great songs immortal. Because right after that first chorus, there’s a cool stop-time part involving Daniel’s acoustic guitar, Eno’s snare and some perfectly-timed handclaps.

That would good enough, but it’s then followed by one of the most gorgeous, joyous-sounding horn riffs ever: a mariachi-influenced blast of pure sunshine that just lights up the entire song.

After the blast, “The Underdog” is just a glorious jumble of Daniel’s voice, Eno’s snare, even more handclaps, and that horn riff, which gets even louder the final time it comes around. And in fact, at the end, it’s pretty much all horns, as they’re now louder than even the noises in my head.

I know this: when we saw Spoon perform “The Underdog” on both SNL and The Late Show With David Letterman, made Rox — who isn’t that much of an indie person, generally — into a Spoon fan, and “The Underdog” remains one of her favorite songs of this century.

Obviously not just her: it’s also one of my top three favorite Spoon songs, and topped out at #26 on the Billboard Alternative charts, no doubt helped out by a clever video that wandered through a “live in-studio” take of the song that looks like it was done in a single shot. It’s also showed up in a bunch of films since then, because everybody loves an underdog.