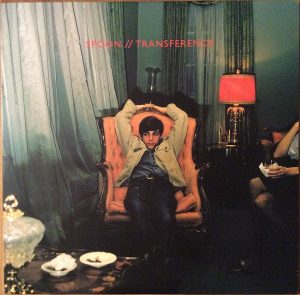 After the big-hearted and big-sounding Ga Ga Ga Ga Ga, Britt Daniel went more insular and experimental for the follow-up, 2010’s Transference, and I didn’t like it nearly as much.

Which means, of course, the song I liked the most from it is probably my very favorite Spoon song, the low-fi basher “Trouble Comes Running,” which starts with a faded guitar in one speaker until Daniel’s “owwwww!” kicks it off properly, with monster drummer Jim Eno alternating being restrained on the verses and letting loose on the choruses.

“Trouble Comes Running” may or may not be about Britt Daniel’s ex-girlfriend Elanor Friedburger of the Fiery Furnaces, and the only reason I say that is that I found a clip of her on the internet covering it, which would be a neat way of her reclaiming it.

All I know is that I like the weird sound, and I especially love Daniel’s harmonies with himself as the song progresses: his high-pitched overdubs over of “here it comes running” in the right speaker in the later verse is worth the price of admission. The kind of hook that stays in my head forever. But actually he’s in conversation with himself throughout the song, like he recorded two totally different vocals and loved them both so much he figured he’d stick in in each speaker.

It’s all very rough and very messy, and I love it so much, especially when compared to the precise precision of so many of his other songs.

This is the last Spoon song I’m writing about, though I’ve enjoyed most of their output in the past decade: 2014’s They Want My Soul and 2022’s Lucifer on The Sofa — which has “Wild,” which I might have written about had I been able to spend more time with it — more so than 2017’s Hot Thoughts, though obviously, your mileage might vary.