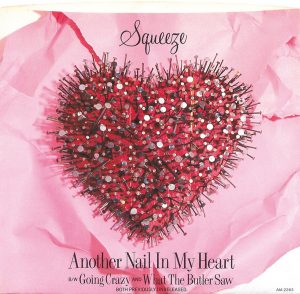 1980’s Argybargy was well and truly where Squeeze started getting their shit together, as it contained both classic singles and classic album cuts all the while showing off Difford and Tilbrook’s ever-sharpening songwriting craft.

That said, because it was 1980 after all, Argybargy didn’t sound that different from a lot of other “new wave” bands — usually it was the vocals that would define the difference to outsiders — so the best songs where the ones where the songwriting craft was the sharpest. Which, duh.

Like “Another Nail In My Heart,” which with its only slightly offbeat John Bently bass / Jools Holland keyboard / Gilson Lavis snare opening could have been confused with something from, I dunno, XTC’s Drums and Wires, though not quite as weird, I guess. At least until Glen Tilbrook opened his mouth to sing about another guy who got dumped.

The case was pulled from under the bed
She made a call to a sympathetic friend
And made arrangements
The door was closed, there was a note
I couldn’t be bothered, maybe I’ll choke
No more engagements

And so where does he go when he’s not trying to be around? The bar, of course!! Where, of course, things aren’t getting any better, as every song that’s being played just reminds him about how fucked he is. Or, I guess, isn’t.

With at least Chris Difford and maybe Jools Holland supplying rough harmonies, that chorus gets over emphasizing the last word of each line: “And here in the BAR / The piano man’s FOUND / Another nail for my HEARRRRRRRRRRRT.” Instantly and forever catchy.

What did I say about not as weird as XTC? Never mind, because after the first chorus, Tilbrook takes an unexpected longer-than-expected solo that leads to a slight recapitulation of the chorus.

After blowing the song completely up, there’s one last verse, and an outro that repeats the chorus over and over for maximum stick-in-your-headness — punctuated with what sounds like a marimba, because why the hell not. “Another Nail in My Heart” perfectly balances an absolutely classic pop hook with an arrangement that keeps you guessing.

And it might have been the guessing that kept it from following “Cool For Cats” & “Up The Junction” into the U.K. top 5, as it topped out at #17, which was still better than other Argybargy singles like “Pulling Mussels (From The Shell)” which stopped at #44, as well as “If I Didn’t Love You” or “Farfisa Beat,” which didn’t chart at all.

“Another Nail in My Heart”


“Another Nail in My Heart” Official Music Video