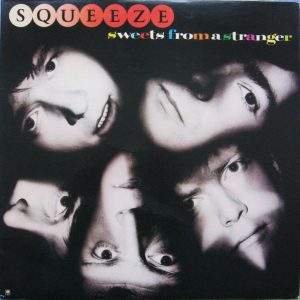 Album: Sweets From a Stranger
Year: 1982

Clearly, after Squeeze’ minor splash with the Paul Carrack-sung “Tempted,” they figured that they’d venture into blue-eyed soul again. But this time, with Paul Carrack one-and-done on the keyboard front, and that meddling Elvis Costello not their producer this time around, Chris Difford would be singing.

And so we got “Black Coffee in Bed,” which Glenn Tilbrook sang the absolute fuck out of, without ever once pretending to be a soul singer.

“Black Coffee in Bed” opens with an organ lick by new keyboardist Don Snow, which is then echoed by Tilbrook’s guitar, and the rest of the band comes in — a little bit slowly, according to both Tilbrook and Chris Difford, who was inspired to write the song by an actual coffee stain on his notebook, and ended up telling a story of what happened next to the protagonist of “Tempted.”

Where “Black Coffee in Bed” really cooks is the long melody of the chorus, which unfolds gorgeously every single time.

And while Gilson Lavis’s builds in the chorus are definitely part of that unfolding, what really makes the chorus are the backing vocals, consisting of that meddling Elvis Costello and Paul Young, who would eventually join Paul Carrack in Mike & The Mechanics because the U.K is a tiny island and there are only so many fauxl singers there, but at the time hadn’t yet recorded his first album, but was clearly already a known quantity. Anyways, I really do kinda love how Costello is a bit flat on “out with a frrrrrrrriend” and it’s a hook rather than an irritant.

From the moment they chime in with “out with a frrrrrieeeennnd”, it’s just fantastic, topped by the “ooooooooooooooh” (over a Lavis build) just before Difford plaintively sings. “and coffeeeeeeeee innnnnnn bed”.

After that, Costello and Young are all over the song — responding to a line here, adding “ooh oohs” there, or repeating the title at the end — they totally make it utterly gripping, like on the second verse.

I’ve loved the optimism of “there’ll be fire in my eyes,” because that’s how it goes: you think that getting out there is going to get you over them, but it does and it doesn’t, and I feel like “Black Coffee in Bed” gets all of that. Especially in its album version, where it keeps adding more and more goodies as it unfolds.

First, there’s a stellar Glenn Tilbrook guitar solo, which comes up on of nowhere in between choruses, and then there’s a fantastic bridge, with Costello and Young switching up from “ooh-oohs” to joining in when Tilbrook sings “coffee in bed” the first time.

And as Tilbrook sings that last line, the whole band drops out entirely and Tilbrook sings “coffee in bed” acapella, before the rest of the band crashes into the chorus yet again.

In the end, Costello and Young chant variations on “black coffee in bed” while Tilbrook sings the words from the chorus until eventually just giving them the song.

As a follow-up to “Tempted” and “Labelled With Love,” it didn’t do as well on the charts — stalling at #51 on the U.K. charts, while only making it to #26 on the Billboard Mainstream Rock Chart — as those songs did. There was also a video played on MTV, but that is a shorter, and much inferior version of the song, which doesn’t even have either the bridge nor the outro I mentioned above. That said, I love it more than “Tempted” and maybe even “Labelled With Love.” Maybe.