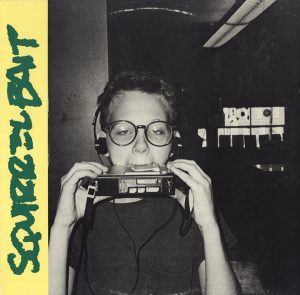 In any event, Squirrel Bait, who were still in high school when they made their earliest demos, announced their aesthetic with the title of the first track of that debut EP, “Hammering So Hard, a maelstrom of grinding guitars, spinning drums and Peter Searcy’s screaming vocals.

Even better, though, was “Sun God,” which brought a sense of dynamics to the proceedings, a fantastic example of the quietLOUDquiet ethos as filtered through late teen energy and ethusiasm.

So at first, the guitars of David Grubbs and Brian McMahan are muted, playing off of each other and drummer Ben Daughtry as Searcy sings the opening verse.

And then of course, the guitars suddenly crank into action, Daughtry finds the beat as Searcy screams

After the second chorus all hell breaks loose as Grubbs, McMahan and Daughtry engage in a dragonfight of overdriven guitar riffs and torrential drum rolls, driving “Sun God” straight up towards the sun itself. The sun, of course, is wearing shades, because this is all too cool for words.

Anyways, that Squirrel Bait EP definitely whetted appetites for the inevitable full-length, Skag Heaven, which didn’t come out until 1987, because a couple of them had started going to college. Skag Heaven was more of the same, but its 25-minute running time after two years to write songs (and one of its 8 songs was a cover, to boot) didn’t really bode well for the future, and Squirrel Bait broke up, with guitarist McMahan going on to join and sing for the well-regarded band Slint, whose 1991 album, Spiderland, is considered a post-rock classic, though I’ve tried to get into it and failed.