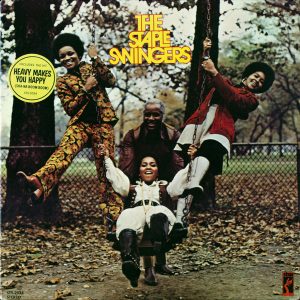 And while their music got more slick when they signed to Stax, it was still Stax, and things like the pro-reparations chant “When Will We Be Paid” came off that much more powerful for it.

And in 1971, they became a legit pop act to boot, with the utterly glorious “Heavy Makes You Happy (Sha-Na-Boom-Boom),” which it says here is one of the greatest singles of the 1970s on just about every single level.

It’s the extra “na-na” the on last line that make it so awesome, not to mention the horns that set up every single line, and without a breath Mavis sidles into the opening verse.

I’ve been trying to find what’s heavy that’s been messing up my mind
I think I found the answer, ’cause it was right there all the time

And then at this point, Mavis backs off, because it’s time for her Pops to sing some lead.

Heavy makes you happy, I just got to say
Put on your heavy, if I can’t feel this way

I’m going to admit it right up front. I don’t understand what this song is trying to tell me. And the second verse, once again split between Mavis and Pops, doesn’t help.

By talking to my people, you know that it occurred to me
It’s more than just a feeling–it’s a philosophy
Heavy makes you happy, drying up your drink
Oh, spread a little heavy and it makes somebody sing

But honestly, I don’t really care if it doesn’t make any sense to me, because my heart lights up every time they hit that “sha-na-na-na-boom-boom, yeah”. After the second verse, there’s a bit of a breakdown, and after Mavis lets loose one of her trademark fading “oooohs,” Pops takes a wonderfully understated solo, and the rest of the song is just a whole series of “sha-na-boom-booms” and Mavis exhortations until the fade.

Despite the fact “Heavy Makes You Happy (Sha-Na-Boom-Boom)” was so incredibly soulful and catchy, it only made it to #27 on the U.S. singles charts. And yeah, while it was the first time they’d cracked the top 30, it certainly wouldn’t be the last.