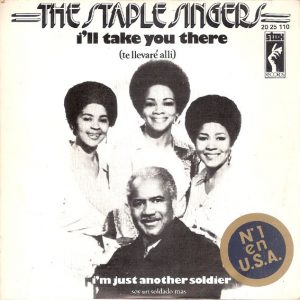 With an opening lifted absolutely wholesale from Harry J All-Stars “The Liquidator,” and the Muscle Shoals cats turning into a riddim section — bassist David Hood kills it from start to finish — “I’ll Take You There” is more of a groove than a song. But wow, wotta groove!

Underwritten but incredibly produced by ace Stax producer Al Bell, “I’ll Take You There” gets over on the aforementioned riddim as well as the vocals, which are basically Mavis with some help from Cleotha, Yvonne & Pops Staple on one of the most infectious call-and-responses ever.

And outside of Mavis exhorting pianist Barry Beckett and guitarist Eddie Hinton during their solos (who, in a bit of kayfabe, she pretends is her father), as well as bassist Hood, that’s basically the entire song: a verse, a solo section, and then the verse again. And that’s it.

But that’s also enough: not only was “I’ll Take You There” the first #1 from the Staple Singers, it’s become a standard and easily the most popular Staple Singers song. Oh, and in doing research for this piece, I discovered something that surprised me: General Public covered this song in 1994, and had their biggest hit, as it topped out at #22. Naturally, it’s really good, and I’m not sure what surprised me more, that it was a big hit or that General Public got back together in 1994.

“I’ll Take You There”