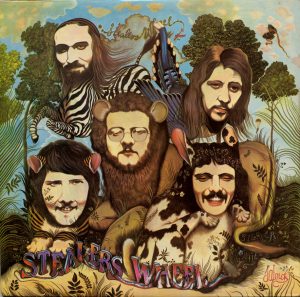 “Stuck in the Middle With You” came out at almost the exact moment I fell in love with KYNO-AM and spent all my time listening to it, and even though I don’t think I ever bought the single, it was definitely one of my favorite songs of 1973, and looking back, it’s pretty easy to see why.

Opening with an acoustic guitar, rumbling bass and handclap(!)-dominated rhythms, “Stuck in the Middle With You” wastes no time digging right into singer Gerry Rafferty’s dilemma: he wants to be Bob Dylan.

Well, I don’t know why I came here tonight
I got the feeling that something ain’t right
I’m so scared in case I fall off my chair
And I’m wondering how I’ll get down the stairs

Oh wait, that’s not it: he’s describing a record company party where the band got signed, and how he and — presumably — his partner, Joe Egan, are the only people at the whole godsdamned party with a lick of sense, leading to one of the most well-known and parodied choruses in pop music history:

That’s Egan adding the harmony vocals, and either Rafferty or Egan playing a cool staccato rhythm guitar part while lead guitarist Paul Pilnick wraps his slide guitar all around the song, all of which comes together on a bridge that’s nearly as cool as the chorus.

Well, you started out with nothing
And you’re proud that you’re a self-made man
And your friends, they all come crawling
Slap you on the back and say
Please
Please

I love how the whole song comes to a dead halt, except for a single cowbell, as Rafferty sings “pleeeeeeeease”. It’s quite literally a song that could only have been a hit in the early 1970s.

Which, of course, it was: “Stuck in the Middle With You” was a massive massive hit, topping out at #6 on the Billboard Charts and #8 over in the U.K., the only time they even came close to the top 10 (though Rafferty’s awesome “Baker Street” — which I somehow totally forgot to write about, because I’m either a clown or a joker — made it to #2 a few years later), and has been a rock staple ever since, having been streamed over 400,000,000 times on Spotify.

Of course, now doubt part of that was its use in Quentin Tarantino’s Reservoir Dogs in the mid-1990s — something that I’m required by law to mention when writing about the song — but even without that, it would still probably be remembered as a classic 70s song.

“Stuck in the Middle With You”


“Stuck in the Middle With You” Official Music Video