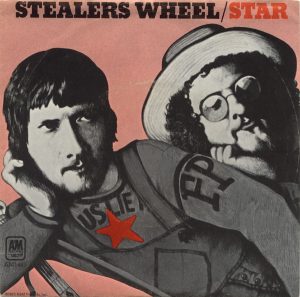 Apparently, Gerry Rafferty — who’d already released a solo album — had quit Stealers Wheel before their 1972 debut album had even come out. But then “Stuck in the Middle With You” became a massive hit, and given how well Rafferty and Joe Egan sang together, Stealers Wheel reformed as essentially a duo for the follow-up, 1973’s Ferguslie Park.

And so, the decision was made to mine Ferguslie Park for the follow-up singles to “Stuck in the Middle With You,” hoping that lightning would strike again. But, of course, it didn’t.

However, that had nothing to do with the songs themselves, which were really quite nice. The first follow-up, “Everyone’s Agreed Everything Will Turn Out Fine” was a remix from the album track that pared it down to guitars, percussion, vocals and handclaps(!), but was too much like a sideways version of “Stuck in The Middle With You” in the much superior single mix — which is practically lost to history, not showing up on any of their retrospectives — to resonate, stalling out at #49 on the charts.

However, the second follow-up, Joe Egan’s “Star,” was an absolute killer from start to finish, opening with a bright acoustic guitar mixed with a (I think) mandolin, and was nearly as pointed as “Stuck in The Middle With You,” as Egan targets, well, Gerry Rafferty, blowing a harmonica after each line.

So they made you a star, now your head’s in a cloud
Now you’re walking down the street, with your feet off the ground

I mean, I don’t know for sure if it’s about Gerry Rafferty specifically, but I think it’s more fun to imagine that it is, especially because it’s the harmonies of Egan and Rafferty on the chorus that make “Star” such a killer track.

They read in the press, all about your success
They believe every word they’ve been told
After all you’ve been through, tell me what will you do
When you find yourself out in the cold?
Ah, tell me
Ah, tell me

I love the contrast of such a fantastic, careening, thrilling melody line for such coldhearted, downright mean lyrics, and the “ahhhhh tell me” when he’s asking questions about things that the titular star can’t even imagine happening.

You breeze through the door, and when you take the floor
You expect to have it all to yourself
After all you’ve been through, tell me what will you do
When you find yourself back on the shelf?
Ah tell me
Ah tell me

After the second chorus, there’s a short barrelhouse piano solo that comes out of nowhere and then disappears — the only piano that’s on the whole song, making it that much better, and in the end Egan and Rafferty just sing the melody line without words through the fade.

Of course, the listening public begged to differ, and while “Star” did better than “Everyone’s Agreed That Everything Will Turn Out Fine,” topping out at #29, it still wasn’t going to untag Stealers Wheel as quintessential one-hit wonders.

After that, of course, things got really dire: they did one more album, 1975’s Right Or Wrong (the answer was clearly in the question) and a couple of singles that nobody cared about at all, and I’m now realizing that the only Stealers Wheel songs I’ve ever heard are the three singles, and that’s probably fine.