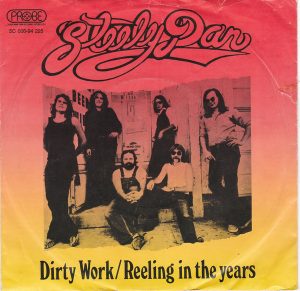 Whereas Steely Dan had to cut “Do It Again” down to a playable size in order to get it on AM radio, they did no such thing for the follow-up, the utterly incandescent “Reelin’ in the Years,” which is my favorite Steely Dan song bar none. My guess is that I’m not alone in that assertion.

An utterly mean-spirited break-up song, “Reeling in the Years” comes storming out of the gate with a shit-hot guitar solo — which establishes the song’s massive hook — by one Elliott Randall, a lifelong session cat whose wikipedia page lists an insane amount of work in music, TV, film and stage shows. And while Randall was (and is) a long time-friend of Fagen, Becker and Jeff “Skunk” Baxter — who I guess was fine Elliott doing all of the leads — he had no desire to join Steely Dan on full-time basis, which somehow makes all of this even more immortal. (Though he played on other Steely Dan records after Fagen & Becker got rid of everybody else.)

And so, after Randall’s opening salvo, “Reelin’ in the Years” settles into a piano-driven bluesy shuffle, as Donald Fagen takes direct aim at an ex.

Your everlasting summer
And you can see it fading fast
So you grab a piece of something
That you think is gonna last
Well, you wouldn’t even know a diamond
If you held it in your hand
The things you think are precious
I can’t understand

What cracks me up about the verses on “Reelin’ in the Years” is that Fagen doesn’t so much sing them as get them over with; his phrasing is all over the map. It’s probably in order to get to the chorus, an all-time joy, where Fagen is joined by songwriting partner Walter Becker — unless it’s Fagen overdubbing himself — on some lush but rough harmonies. Everybody sing!

Are you reelin’ in the years?
Stowin’ away the time?
Are you gatherin’ up the tears?
Have you had enough of mine?

Are you reelin’ in the years?
Stowin’ away the time?
Are you gatherin’ up the tears?
Have you had enough of mine?

They do a really cool thing where there’s a quick break in the middle of the chorus, and Randall does some extra commentary on guitar when they repeat it, adding a bit of extra tension. Also adding extra tension, Fagen’s utterly vicious second verse.

After the second chorus, it’s time for another solo by Randall, who at first keeps it under control by playing the same thing for a few bars while the band pounds underneath him — unless that’s Baxter & Denny Dias doing a Thin Lizzy thing, because that’s also possible — and then he just takes off into the stratosphere, crashing back into earth just in time for one last totally annoyed-sounding verse.

That’s because she clearly thinks you’re useless, dude!! Understand that!

On the final chorus, Randall is all over it from the start, spewing red hot shards of guitar. One of the things that both the Wikipedia page and the Genius page for “Reelin’ in the Years” wants everybody to know is that “Jimmy Page has reportedly said that session musician Elliott Randall’s guitar solo on ‘Reelin’ In the Years’ is his favourite solo of all time.”

There’s a couple of things I don’t understand about this. First off, I don’t understand why people care what an obscure 60s session guitar player who did an album with the Yardbirds after Jeff Beck left and then was never heard from again thinks, and secondly: “which solo?” Because there are three of them: the one that opens the song, the one in the middle of the song, and the one that closes it out; all of which are fucking insane, even on the AM radio, where I first heard “Reeling in the Years” during the spring and summer of 1973. In fact, in my imagination, that guitar even sounded better blasting out of my shitty AM radio than it does right now as I’m writing this piece.

Anyways, “Reelin’ in the Years” didn’t do quite as well as “Do It Again” on the Billboard singles charts, stalling just outside of the top ten, at #11, but as I write this, it’s their most played song on the Spotify by a pretty decent margin, and one of those things that instantly turns the world into 1973.

Since Randall wasn’t part of the band, Baxter plays the lead guitar in the live versions I’m posting below, and he doesn’t quite catch the same fire, so maybe that’s why he was fine with Randall doing the solo in the first place.

“Reelin’ in the Years”


“Reelin’ in the Years” live on the Old Gray Whistle Test