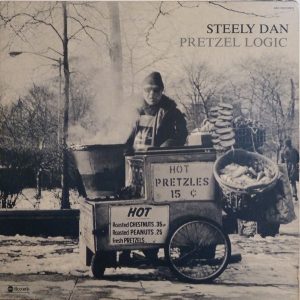 The first, last and only time I ever purchased a Steely Dan vinyl (or any physical media, really) was when I bought the 7″ single of “Rikki Don’t Lose That Number” in the spring of 1974.

Of course, at the time, I had no idea that Steely Dan were on their last legs as an actual group, as the original quintet dissolved after this album, but given the fact that the guitar hooks on “Reelin’ in the Years” and “Show Biz Kids” were played by ringers and that their founding drummer, Jim Hodder, didn’t even play on Pretzel Logic: except for a track where the future guy from Toto played drums, the tragically awesome (or awesomely tragic) Jim Gordon played in it.

Of course, I didn’t know that, either. Or that the cool piano bassline that open the song was a steal from a Horace Silver jazz song called “Song For My Father.” Or that folks thought that the titular “number” was slang for a joint. I mean, I was eleven, and the most exposure I had to weed was my Cheech & Chong records, and I don’t recall them using “number” on any of those records.

All I knew is that I loved that slinky opening, and the and the quiet opening verse, sung by Donald Fagen.

We hear you’re leaving, that’s okay
I thought our little wild time had just begun
I guess you kind of scared yourself, you turn and run
But if you have a change of heart

And I loved the little piano riff before the full throated chorus, with Walter Becker (at least) joining in and Jim Gordon driving the second half with some great beats and rolls.

And, of course, I totally took that chorus at face value, and it turns out I was right. It had nothing to do with drugs, but was literally about a woman named Rikki to whom Fagen had given his phone number at a party, and who he really wanted to call him, even if he wasn’t sure what they would actually do if they got together.

I have a friend in town, he’s heard your name
We can go out driving on Slow Hand Row
We could stay inside and play games, I don’t know
And you could have a change of heart

After the second verse, there’s a fiery guitar solo from Jeff “Skunk” Baxter, who would weather the dissolution of the band just fine, landing with the Doobie Brothers, who were probably even more popular than Steely Dan were in the back half of the 1970s. Baxter’s guitar solo directly to the bridge, which is my favorite part of the song.

And after that, one more chorus, and then an outro where they call-and-respond the title a couple of times over the Horace Silver lick. Apparently, she never called him, so tough luck, Donald Fagen.

Like I said, I bought the “Rikki Don’t Lose That Number” single, and I wasn’t the only one, as it became their second top ten hit, making it all the way to #4 — still their highest-charting single — and helping push Pretzel Logic into the album top ten as well.

After that, though, I kinda lost interest in Steely Dan, as I started getting into metal, prog, and later on, punk. And even all these years later, I’ve not fully explored their discography, which I know is a sin in some parts of the world. That said, “Black Friday” is pretty cool, and De La Soul’s “Eye Know” made me appreciate “Peg.” I just guess I’m still not old enough to understand their music after 1974.