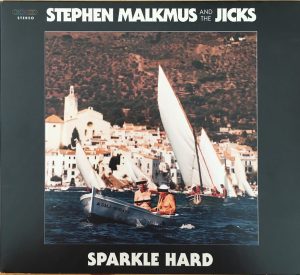 But it was totally worth the wait, as Sparkle Hard showed absolutely zero drop in quality. And perhaps some of that could be chalked up to absence making the heart grow fonder — I’m always going to have room for his songs, voice and guitar in my life — it’s also because there were songs as compelling as the artsy closer “Difficulties / Let Them Eat Vowels” and the first single, “Middle America,” which is one of those songs that remind me exactly why I’ll always have room his songs, voice and guitar. Oh yeah, and his lyrics, too.

Whether or purpose or not, the verses of “Middle America” come across as a faster version of Slanted and Enchanted’s “Here,” a straight-ahead folksy strum with his lead guitar doing counterpoint on the verses and then singing harmonies on the choruses, which come on after a slight build.

Men are scum, I won’t deny
May you be shit-faced the day you die
And be successful in all your lies
In the wintertime, in the wintertime
When we get down to it, you wanted to

And while “Middle America” is kind of understated, it’s also incredibly lovely, and the repeated “in the wintertime, in the wintertime” kinda reminds me of a Pavement song that I can’t remember which one though it might be “Range Life,” or it might not be. I guess it’s a good sign that it reminds me of a Pavement song but I can’t remember which one. In any event, Stephen Malkmus can perform songs like this until the end of time and I’ll be just fine with it.