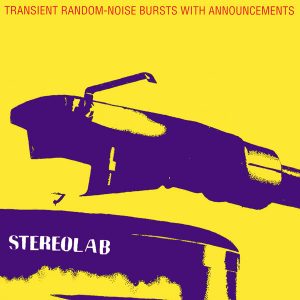 That said, “Jenny Ondioline,” — named after an electric keyboard invented by a guy named Georges Jenny — is an absolute classic of longform drone music. Probably one of those songs you love or hate, though, and it goes on and on and on and on for long stretches at a time, punctuated only by utterly gorgeous “ooooooooohs” and occasional lyrics, sung by Sadier and Mary Hansen.

Life on Earth is a bloody hazardous affair
As in the city, the republic was collapsing away
I think the brilliant crust’s hiding sad realities to come
And there’s a decisive battle that we all had that we lost

Honestly, though, I’ve never had any idea what the lyrics to “Jenny Ondioline” were: they’re mixed pretty low, and I’ve always been too busy enjoying the trance-inducing aspects of the song to even notice how provocative they were.

Anyways, “Jenny Ondioline” starts with a guitar fanfare before heading directly into droneland. Not once, but twice, coming to a dead stop at about 6:40 to reintroduce the fanfare and then the drone, and eventually the vocals, which spend the next several minutes asking and demanding variations on the same thing.

Once again, I’ll admit I had no idea what they words were, as they were mixed down enough that I paid more attention trying to figure out what were guitars and and what were keyboards as it went on and on and on and one, eventually collapsing into the fanfare disguised as a wall of impenetrable noise, which dissolves into a keyboard, bass and drumbeat as the song fades out.

And it has to fade out, because there is no doubt that is still going on, forever and ever, world without end amen.