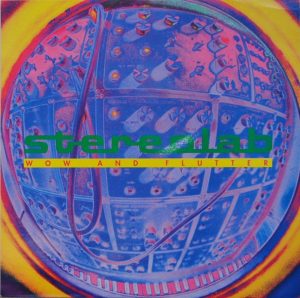 This is where I came onboard, having missed their earliest records, as well as Transient Random-Noise Bursts with Announcements — maybe the greatest album title ever? — but the reviews of Mars Audiac Quintet were clearly too much for me to pass up, and I definitely loved the precise precision of the music, with everything in its right place.

A perfect example of this was “Wow and Flutter,” where layers of organs and special synth effects sat on top of a chugging guitar and the steadiest drumbeat outside of a drum machine, over which Lætitia Sadier realizes her mortality.

I didn’t question, I didn’t know
As far as I’d seen, life was endless
When I realised I had to let go
We are mere mortals as to the rest

And once she realized her own mortality, it stood to reason that various institutions were also not forever.

Once again, the combination of her vocals being mixed low as well as her odd phrasing meant that these lyrics were a bit impenetrable for me, because I was enjoying the cool backing vocals, the stray synth squiggles and keyboard hooks that floated in and out of the music. It’s definitely one of those songs where you get something different out of it every time you listen to it.