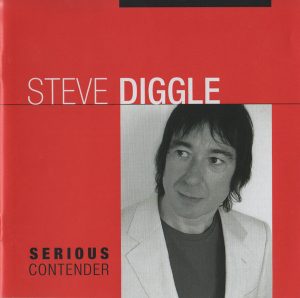 Even before Pete Shelley passed away, Steve Diggle was definitely relegated to second banana status, even if his guitar playing as nearly as essential to the success of The Buzzcocks as was Shelley’s voice and guitar. And he did sing lead a couple of their greatest songs: the acoustic rant “Love is Lies,” the swirling “Airwaves Dream” and the immortal “Harmony in My Head,” as well.

That he was essential to the Buzzcocks was clear from the start: outside of Pete Shelley, Diggle was the only member of the Buzzcocks to play on all of their records — a reminder that they reunited in 1989 (I saw them in San Francisco, and they were awesome!) and released several albums from 1993-2014 — and in fact, he’s just released a new album under the Buzzcocks name, which, as of this writing, I still haven’t heard. And I’m not even sure how I feel about hearing it.

That said, Diggle had one song from a non-Buzzcocks album that I really kinda love: “Shake The System,” from his 2005 solo album, Serious Contender.

“Shake The System” is a multi-part epic that brings such longer Buzzcocks songs to mind like “Why Can’t I Touch It?” and “I Believe,” though it’s nowhere as great as either of those two songs, even if it goes from phased guitar to big-asss to cool leads before Diggle even opens his mouth to sing.

Nobody can take out your mind from you
You know this land was meant for you and me
And when the Flood comes, whatcha gonna do?
You know you can’t hide inside your TV

After which we get more leads, more phased guitar, more big-ass riffs, and the occasional yells of “shake the system,” followed by a long long phased outro, over which Diggle occasionally goes “ooooooooh, take it on” (I think), as he adds some more guitars to the mix.