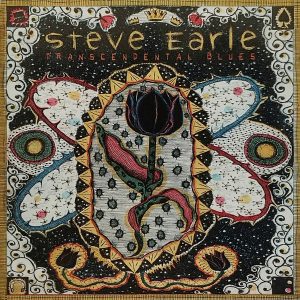 That said, the next song that fully wiped me out was the opening track from his first album of the 21st century, 2000’s Transcendental Blues, which yet another wrinkle to his arsenal: psychedelia.

“Transcendental Blues” opens with the drone of a harmonium, tablas and an acoustic guitar playing the song’s main melody — all played by Earle — as bassist Dan Metz and drummer Ron Vance launch into a highly compressed-sounding beat: Vance’s snare in low-fi trashcan mode, over which Earle sings the first verse in a dreamy, languid voice.

In the darkest hour of the longest night
If it was in my power, I’d step into the light
Candles on the altar, penny in your shoe
Walk upon the water, transcendental blues

Right after this verse, Earle cranks up his electric guitar, overdriven and fuzzed-out, and plays the melody line of the song, and it’s both totally gorgeous and completely unexpected, and the utterly disappears as he sings the second verse.

Happy ever after until the day you die
Careful what you ask for, you don’t know till you try
Hands are in your pockets, staring at your shoes
Wishing you could stop it, transcendental blues

“Transcendental Blues” doesn’t really have a chorus or anything: it basically trades off between Earle singing the melody with his words and his guitar singing the melody with the fuzz. But honestly, that’s all it needs, and quite literally, after the guitar solo on the third verse, it just ends after doubling back over itself a couple of times.

But I wasn’t the only one who loved it: despite the critical acclaim for I Feel Alright and El Corazón, they didn’t chart anywhere. However, The Mountain did put Earle back on the Country album charts, topping out at #19. And buoyed by “Transcendental Blues” the song — which made it to #18 on the U.S. Adult Alternative Airplay charts — Transcendental Blues the album was Earle’s highest-charting album on the Country charts since Guitar Town, peaking out at #5. It also was his first album since Copperhead Road to dent the Top 100 Album charts, peaking at #66.