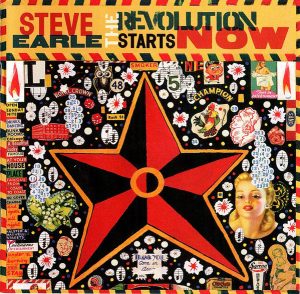 Steve Earle responded to all of this with his two most political albums, 2002’s Jerusalem, detailing some of his thoughts about the reaction to 9/11 and The Revolution Starts Now, about living with the completely arbitrary, ill-conceived and bullshit war our country had been plunged into.

While Jerusalem probably got the most notice — songs with titles like “John Walkers Blues,” “I Oppose The Death Penalty” and “Amerika V. 6.0 (The Best We Can Do)” will do that — and charted higher (#7 country, #1 Independent, and #59 on the Billboard album charts), I prefer The Revolution Starts Now, probably because it contains some of the hardest-rocking songs of his career, like “The Seeker,” and “F The CC”, as well as the title track.

With the latest version of the Dukes featuring two 80s indie-rock stalwarts — ex Del-Lord Eric “Roscoe” Ambel on lead guitar and the indomitable once and future dB Will Rigby on the drums — “The Revolution Starts Now” is noisy and solid from the get-go, with the whole band adding handclaps(!) surrounding the second verse and the chorus that follows it.

Of course, the revolution did not start then, but there was a lot of cool-sounding guitar from Earle and Ambel, as well as a really cool effect on the final verse where Earle doubles complements his singing on the final verse with a compressed spoken-word overdub as he describes his vision for the post-revolution world.

Of course, you might imagine that all of his rabble-rousing might have set fire to his career in the same way that the Chicks had gotten cancelled by not following the cultural correctness of the times and dissing our warmonger President from a London stage, but of course it didn’t. At least partially because the Chicks were women and therefore already suspect by those who were looking to cancel any anti-war speech, and at least partially because he didn’t have as far to fall. And because there were enough alt-country and indie rock fans like me who felt the same way he did.

And so, “The Revolution Starts Now” the song made it up to #15 on the Adult Album Alternative charts and the album sold enough to — like Jerusalem — make it to three different charts: #12 Country, #7 Indie and #89 on the big album chart. And Earle never stopped writing political songs.