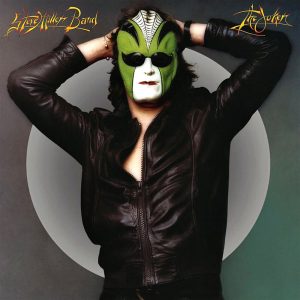 We are now almost a half-century away from that time, which set up an improbable Imperial phase for Mr. Miller, where nearly all of his singles went to the top 10, and I have come around on “The Joker.” Kinda. And I think what sorta got me on the right path was The Simpsons, as they so often have over the decades.

“The Joker” wastes no time with any opening guitar riffs or anything like that, and instead, Miller starts immediately singing the first verse, supported by the sparse beat from drummer John King and dominated by a lazily lyrical bassline from Gerald Johnson that coulda been reggae had they taken the time. And y’all know that Miller sings this.

Now you gotta remember something: when “The Joker” came out in late 1973, I was eleven years old, and I had no idea just how meta Steve Miller was being with the references to his earlier songs, but I was pretty sure that “the pompatus of love” was a totally made-up thing. Which may or may not be true, as people have had a half-century to track down where Miller got that from. Me, I don’t really care, because it wasn’t the weird lyrics that bumped me; it was the wolf-whistle slide guitar.

And Miller repeated it two more times in the song, just to fuck with me. And it worked! I was totally fucked with. So I figured I could write “The Joker” off, especially given that I loved most of the singles that came afterwards. As you’ll see.

Then, in late 1991, The Simpsons aired an second-season episode called “The Way We Was,” and while I’m not going to explain again what a transformative thing The Simpsons was in the early 1990s, I’ll just say that from the start, I recorded every episode, because I was sure it wouldn’t last past the first season. And I did long after it became a phenomenon, because I didn’t trust that, either. (Also, because there was no other way in the early 1990s to re-watch the most rewatchable show I’d ever encountered.)

Anyways, “The Way We Was” detailed how Homer first fell for Marge when they were in high school, and as such, flashed back to 1974. And one of my favorite scenes in that ep was Homer singing along to his radio, which was playing “The Joker. Fucking hilarious. Right now, in 2022, the equivalent episode — and they still do those occasionally — would be set in 2005, and Homer would probably be singing “Gold Digger,” “Boulevard of Broken Dreams,” or “Mr. Brightside.”

Without going too deep into that clip, the genius is how Dan Castellaneta is never quite on top of the song, singing it exactly how a mid-70s high school boy would sing it.

Anyways, re-watching those early Simpsons seasons were the beginning of my softening my attitude towards “The Joker,” because as much as I hated the verses, I couldn’t ever get that chorus out of my head, as Miller’s acoustic guitar comes into the forefront while he sings the chorus, which I’m now going to put into your head.

‘Cause I’m a picker, I’m a grinner
I’m a lover, and I’m a sinner
I play my music in the sun
I’m a joker, I’m a smoker
I’m a midnight toker
I sure don’t want to hurt no one

Not only is this chorus insanely catchy, there are some great harmonies from Johnson. I think this is why people responded to “The Joker,” because Miller seemed like the kinda guy you wanted to hang with, while rock and rolling all day and partying every night. We all know that Steve Miller isn’t a chill dude, after all, but that’s the beauty of art, isn’t it?

And, for me, it brings up an unanswerable question: if you hate part of a song, do you hate the whole song? Because I still hate those wolf whistle slide guitars, but I love the chorus, and enjoy the meandering guitar solos, and the weird song structure, as well. I mean, “The Joker” might be the only smash single in pop history that ends on a verse, not a chorus. Who even does that? It’s because when he recorded the song, Miller didn’t really expect to be as big as it was, so just let it kinda peter out with a repeat of the last verse — and to torture me specifically, one last wolf whistle guitar.

Anyways, somehow, Steve Miller’s 10th single went to #1 on the U.S. Billboard Hot 100 when none of his other singles had made it higher than 69 (nice), which was the beginning of an improbable run of huge singles. Oh, and 17 years later, it topped the U.K. charts on the back of an appearance in a fucking Levi’s ad, which is the longest gap between a song topping the charts in both countries.

And it remains his most popular song, with over 440 million listens on Spotify as I write this.


“The Joker” Live on the Midnight Special