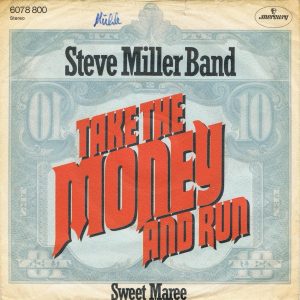 But we all know that didn’t happen. Instead, starting in the spring of 1976, Steve Miller had one of the most improbable runs in pop music history, dominating the radio — both AM and FM — for the next two years, kicking out six straight top 30 singles, all of which are instant time travels to the mid-1970s without sounding too dated.

The first of these was “Take The Money and Run,” which started off with an extended drum fill from new drummer Gary Mallaber, a “hooo-hooo” from Miller and his vocals kicking in with his rhythm guitar. Everybody sing!

This is a story about Billy Joe and Bobbie Sue
Two young lovers with nothin’ better to do
Than sit around the house, get high, and watch the tube
And here is what happened when they decided to cut loose

They headed down to, ooh, old El Paso
That’s where they ran into a great big hassle
Billy Joe shot a man while robbing his castle
Bobbie Sue took the money and run

So, we’ll get to Miller’s utterly aces rhythm guitar a bit later, but what I love about this opening verse is how Miller somehow extends a line that was probably “They headed down to El Paso” on the page (I’m giving Miller credit here that they were actually written down somewhere) to “they headed down to, ooooh … old El Paso,” which you barely even notice because of the super quick five handclaps that distract you from that.

Miller is not an disinterested party here: you can tell that he’s rooting for these two crazy kids, and having almost as much fun as they are, on the lam in the great southwest. All of this leads to one of my all-time favorite verses by anybody.

AHAHAHAHAHAHAHAHAHAHAHA! “Texas,” “facts is” “justice” and “taxes” just might be the worst rhyme scheme in the history of songwriting, and that’s discounting the dodgy grammar of “facts is.” And I love it to pieces, especially the utterly extraneous “he makes his living off of the people’s taxes”, which might have made sense as the second or third line, but you know he wanted to separate “Texas” and “taxes” as much as he could.

Once again, none of this matters, especially since Billy Mack is apparently incredibly shitty at his job, because even though he knows exactly what the facts is, he isn’t able to make any arrests. Sorry about that, guy who got shot during the robbery.

Bobbie Sue, whoa, whoa, she slipped away
Billy Joe caught up to her the very next day
They got the money, hey, you know they got away
They headed down south, and they’re still running today
Singing

Like I said, Billy Mack never had a chance, because Miller so discounted him that he didn’t even bother to give him a different first name than Billy Joe, and that’s a thing I never even noticed until right this second, despite hearing this song approximately a zillion times on the radio in the mid-1970s. However, I am now assuming that “Take The Money And Run” is set in an alternate universe where all men have the first name of “Billy” (and single-syllable last names, so I’m going to assume that the name of the guy who got shot was “Billy Ted”).

ANYWAYS, the rest of the song is basically a bunch of “hoo-hoos” and “go on take the money and runs” and Miller utterly shredding on his rhythm guitar, an absolutely fantastic rhythm guitar solos, as his guitar tumbles over and over itself a few times while bassist Lonnie Turner slides some bass runs and Gary Mallaber tossing in some nice fills as well.

It all added up to a song that’s easily my favorite Steve Miller song. It also just missed the top ten, maxing out at #11 on the Billboard pop charts, but definitely set the stage for the the even bigger successes to come.

“Take The Money and Run”