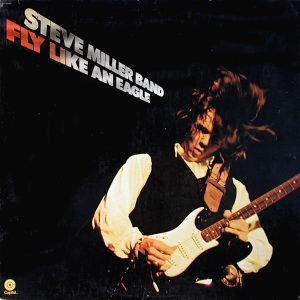 No so much “Rock ‘n Me,” which starts out with a guitar fanfare that is nod and a wink to Free’s “All Right Now” and almost instantly settles into a Chuck Berry groove, over which Steve Miller talks about a love so strong that he’s even tempted to get gainful employment to keep it.

Well, I’ve been lookin’ real hard
And I’m tryin’ to find a job
But it just keeps gettin’ tougher every day
But I got to do my part, cause I know in my heart
I got to please my sweet baby, yeah

Why? Because she’s a great fuck, that’s why! And he wants to continue to fuck her.

I mean, unless you want to interpret it some other way, but I guarantee you that’s how it came across. In a later verse, Steve even lists all of the places he went looking for this great lay.

I went from Phoenix, Arizona
All the way to Tacoma
Philadelphia, Atlanta, L.A
Northern California, where the girls are warm
So I could hear my sweet baby say

That’s quite a circuitous route, and couldn’t he have stopped somewhere in the midwest?

Outside of a cool bridge where they repeat the “All Right Now” opening motif while Steve also implore her to keep on “rockin'” him, “Rock ‘n Me” is incredibly slight, but it’s also incredibly catchy, as was the style of the times.

Which I guess is why it became Miller’s second #1 hit, sandwiched in between the aforementioned Chicago and Rod Stewart songs. And probably because of that success, and the follow-up success “Fly Like an Eagle” the song, which made it to #2 in March, 1977, Fly Like an Eagle the album became Miller’s all-time best-selling studio album.