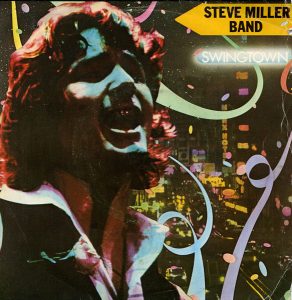 I’m not sure why this is: after all, 1977 was 45 years ago, but the only possible reason for this would have been that I wasn’t listening to the radio as much, as I was beginning to go out and by albums, as well as staying up and talking to people on the CB radio, which got introduced into my life that spring. Fucking social media.

Anyways, when I did hear and pay attention to “Swingtown,” I really like it, even though — or maybe because — it was unlike any of those previous singles, though structurally, it might be the simplest of all of those singles, which is really saying something.

Then, the song breaks into the second part, which features more a straight-ahead rock beat, and is over pretty quick.

And that’s pretty much it for “Swingtown:” Miller repeats the “ooooooh-oooooooooooh” and the verse again, replacing “let’s make some romance” with “we may not get another chance.”, and doesn’t sing for the rest of the song, choosing to do a guitar solo over the “we’ve been working so hard” part, and ending the whole thing with a long synth solo that is basically doing the “ooooooh-oooooooooh” part until the fade-out because Miller know the value of a great wordless hook.

That said, it was clear that Miller’s magic run was coming to an end, as “Swingtown” only made it to #17 on the Billboard singles charts, which was actually better than “Jungle Love’s” #23, but still not what he was aiming for.

And I’m guessing that Miller knew it to, as he didn’t put out another studio album until 1981’s Circle of Love. In between all of that, of course, he made “Swingtown” the opening track of 1978’s Greatest Hits 1974-78 album, which cynically repackaged the best songs from Fly Like an Eagle and Book of Dreams, and added “The Joker” for good measure.

And in fact, at the time, the kids kinda saw through that ploy: Greatest Hits 1974-78 only ever made it to 18 on the albums chart, since The Joker had gone gold and the other two platinum in their first years. But Miller had the last laugh, as Greatest Hits 1974-78 was so obviously the only Steve Miller album that anybody needed to own, it has sold 15 million copies over the decades.

Miller did have one more #1 hit single, of course, topping the charts in 1982 with the utterly dread “Abracadabra,” which I despised then and still dislike now.