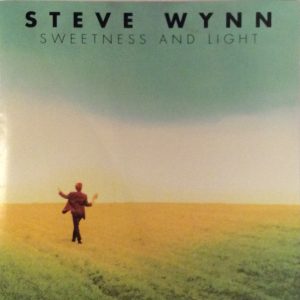 Which is why I was pleasantly surprised when I put on 1998’s Sweetness and Light — featuring a ridiculous and hilarious cover of Wynn romping in a field — and the first thing I heard was the unforgiving four-on-the-floor drumming of Linda Pitmon, who used to drum in a band called Zuzu’s Petals, but has spent the past 25 years co-piloting Steve Wynn’s music and his life. Also helping, Wynn’s guitars, both on the jagged hook that reoccurs throughout, and the jangle he puts on the verses.

Just out of JFK
The turbulence
Was terrifying
I closed my eyes
And did my best
To shake my fear of flying
I’m not so heroic
Cavalier
Or even stoic
You want catastrophe?
It’s nothing that you’d want to see

I’m not a good flyer. I’m just not a big fan of be cooped up in a whooshing tube for several hours. But of course, the miracle and reward is that when you finally get out of that tube, you’re somewhere else entirely. Hopefully. But maybe not.


Of course, what makes “Silver Lining” so cool is the contrast between the horrific flight Wynn is describing and the “don’t worry be happy” call-and-response lyrics of the chorus, with backing vocalists Dave Rave, Lauren Agnelli and, of course Pitmon a heavenly host of angels trying to distract him from his impending doom.

Hell, even Wynn is having fun for a second when he sings “well, look at that.” And all of this is given even more layers by an absolutely harmony-drenched bridge where Wynn declares “Nothing’s ever gonna save me / Nothing’s ever gonna change” whereupon he straps the guitar back on for one more horrifying verse, because apparently this flight was five fucking hours of pure terror. No thanks.

I love the humble brag in “evidence is quite contrary,” I guess that the plane landed, though at the fade, all we hear are the backing vocals and Wynn’s stinging guitar, so we’re not sure. Maybe he’s narrating the whole thing from the grave, or maybe, like the Cat Burglars, he has multiple lives.

One thing for sure: this song would totally freak me out if it wasn’t for the matter-of-fact Wynn sings those verses. Oh, and the drumming. In any event, it all added up to my favorite Steve Wynn song since “Black” from the final Dream Syndicate album.