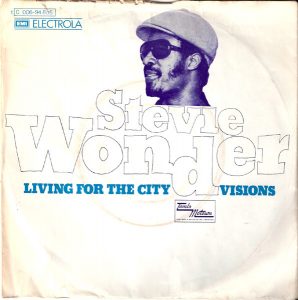 Of course when I first heard my eventual favorite Stevie Wonder song, it was just the shortened single version on KYNO-AM, which they didn’t even have to edit to make a single, as there is a repeated chant of “living for the city” about halfway through which was perfect for the single fade.

So I’ll just say that I don’t exactly remember when I heard the full album version, but I know it was over the radio and I know that it blew my mind, and I know this apocalyptic art-funk cautionary tale is not just the greatest thing that Wonder ever recorded, but one of the greatest things anybody ever recorded. And except for “other voices” in the middle, every single fucking note was Stevie Fucking Wonder.

A boy is born in hard time Mississippi
Surrounded by four walls that ain’t so pretty
His parents give him love and affection
To keep him strong moving in the right direction
Living just enough, just enough for the city

His father works some days for fourteen hours
And you can bet he barely makes a dollar
His mother goes to scrub the floors for many
And you’d best believe she hardly gets a penny
Living just enough, just enough for the city (Yeah)

After the second verse, there’s an interlude where the TONTO synth purrs and mews and a plethora of overddubbed Stevies sing:

And this part is a bit of a break in the darkness, but it also gives you a bit of time to reflect on the words you’ve been listening to, and it only lasts for a short period, as with an otherworldly scream, Stevie continues piling on the verses, showing the things he’s seeing in his innervisions:

His sister’s black but she is sho ’nuff pretty
Her skirt is short but Lord her legs are sturdy
To walk to school she’s got to get up early
Her clothes are old but never are they dirty
Living just enough, just enough for the city (Mmm)

Her brother’s smart, he’s got more sense than many
His patience’s long but soon he won’t have any
To find a job is like a haystack needle
‘Cause where he lives they don’t use colored people
Living just enough, just enough for the city (Yeah)

After the fourth verse, there’s the synth and “da da da” interlude, which is followed by what for all the world seems like an outro, as, over handclaps — because of course one of the greatest recordings of all times would have handclaps — background vocalists Stevies Wonder chant “living just enough for the city” as lead vocalist Stevie Wonder interjects things like “nothing but a city” and “the funky, crowded city” (which I’ve always heard as “the foggy crowded city”) as the song seems for all the world like its ending.

Psych! It’s actually just beginning, as over just some stray synth bleats, we’re treated to a short film, a cautionary tale about the guy from Mississippi getting on a bus to New York City — because in the 1970s, it had to be New York City — and he’s barely off the bus before a corner kid hands him some drugs to hold, the cops arrest him, a jury finds him guilty and the cops toss him in the slammer with one of the most hardcore uses of a racial epithet ever recorded. (So hardcore that Public Enemy sampled it on their greatest song “Black Steel in the Hour of Chaos.“)

And knowing that it would have never worked had Stevie done all of the voices, he got real cops to do the cop voices, and they were the ones that came up with the racial epithet, because of course they were.

Anyways, after all of that, “Living For The City” starts back up, and now he’s pissed, and sings the final verse in the angriest possible manner, his voice utterly shredded — apparently associate producers Malcolm Cecil and Robert Margouleff kept fucking with him during his vocals — fucked up and hoarse, but clearly feeling every single word as well, as he gives the greatest vocal performance of his life.

His hair is long, his feet are hard and gritty
He spends his life walking the streets of New York City
He’s almost dead from breathing in air pollution
He tried to vote but to him there’s no solution
Living just enough, just enough for the city

I hope you hear inside my voice of sorrow
And that it motivates you to make a better tomorrow
This place is cruel, nowhere could be much colder
If we don’t change, the world will soon be over
Living just enough, stop giving just enough for the city

That last verse is pure chaos, overdubbed counterpoint vocals bouncing everywhere, but not enough to drown out Stevie’s guttural “just enough for the ci-taaaaaaaay”, which is beyond the blues, beyond death, beyond everything.

After that, a couple rounds of “da da das,” and finally Stevie singing “no no no no no no” at the very end. Magnificent.

As a single, “Living For The City” made it to #8 on the Billboard Hot 100 while topping the soul chart — oh, and it won the “Best R&B Song” Grammy as well, but, like The Who’s “Won’t Get Fooled Again”, which made #15 as a single, you are banned from listening to anything but the glorious album version.

“Living for The City”