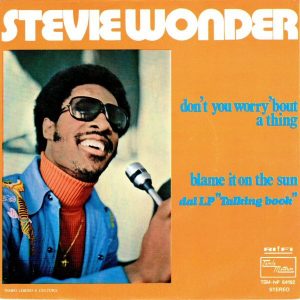 But Innervisions wasn’t all philosophy and politics; at least that seemed to be the case with the third single, the salsa-flavored “Don’t You Worry ’bout a Thing, which opened up with just Stevie at a piano spouting what seems to be complete gibberish before launching into an pickup routine declaring all of the places he’s been to (including the prescient “Iraq, Iran”) before declaring himself a very fluent Spanish speaker because he knows the word “chévere,” which roughly translates to “groovy.”

Naturally, after that weird opening, Stevie gracefully transitions into the song properly, singing in his calmest voice, his piano and voice surrounded by latin percussion.

At least a first, that sense of calm permeates the first chorus, Stevie not even raising his voice for reassurance.

Unlike a lot of the other songs on Innervisions, “Don’t You Worry ’bout a Thing” isn’t laden with instrumental overdubs, though, as always, Stevie does add a fair share of overdubs near the end of the song, having the calm voice, but still not going into overdrive.

And while he’s basically saying “don’t worry, everything’s groovy” — whether or not it was sincere or sarcastic depends on you, I guess — I honestly thought that he was singing “pink Chevrolet” instead “bien chévere”, and either way, I’ve always loved the songs extended outro, which is basically variations on the title until the end.

Anyways, “Don’t You Worry ‘Bout a Thing” was the Stevie’s first single since Music of My Mind’s “Keep On Runnin'” not to crack the top 10 on the Billboard charts, stalling out a #16, but weep no tears for Stevie, as 3 out of his next four singles would top the charts.

“Don’t You Worry ’bout a Thing”