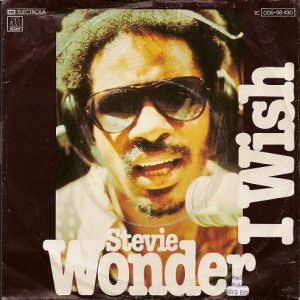 Songs in the Key of Life was such a monster that Stevie Wonder didn’t even release its first single until two months after the album came out. Apparently, they waited to see which songs radio played prior to actually releasing singles, and even then, they never actually released “Isn’t She Lovely” as a single, believe it or not.

That said, they did release “I Wish” as the first single, which turned out to be a good call, as “I Wish” was an instant grabber, hooking you from the moment Nathan Watts started his impossibly funky bassline, which provided a throughline to a song that went a lot of different places.

Looking back on when I was a little nappy-headed boy
Then my only worry was for Christmas, what would be my toy
Even though we sometimes would not get a thing
We were happy with the joy the day would bring
Sneaking out the back door to hang out with those hoodlum friends of mine
Greeted at the back door with, “Boy, thought I told you not to go outside”
Tryin’ your best to bring the water to your eyes
Thinking it might stop her from whoopin’ your behind

On those last four lines, Stevie is joined by a horn section — Hank Redd & Trevor Lawrence on sax, Raymond Maldonado & Steve Madalo — that would end up becoming an integral part of the song, at first providing commentary after each line, but punctuation on the choruses.

Of course, it was the syncopation of the horns that chorus which made “I Wish” jump out of the speakers: “I wish those days [BLEAT] could [ BLEAT] come back [BLEAT] once more” is insanely catchy, as is the “do-do-do-dos” over quick handclaps(!) Stevie shares with his sister, backing vocalist Renee Hardaway, who is also responsible for that great aside on the second verse.

Brother said he’s telling ’bout you playin’ doctor with that girl
Just don’t tell and I’ll give you anything you want in this whole wide world
Mama gives you money for Sunday school
You trade yours for candy after church is through
Smokin’ cigarettes and writing something nasty on the wall (You nasty boy)
Teacher sends you to the principal’s office down the hall
You grow up and learn that kind of thing ain’t right
But while you were doing it, it sure felt outta sight

Hardaway’s pitch-perfect line reading of “you nasty boy” is just arch and funny enough to be the kind of thing you might listen to the entire song just to hear another time.

After the final verse, the horn section gets an extended outro section where they toss out yet another hook — an absolutely splendid long winding line – while bassist Watts and drummer Pounds get to show off a little.

“I Wish” was clearly the perfect song to be the lead single from Songs in the Key of Life, as it became yet another chart-topper, making #1 on the Billboard Hot 100 and R&B Charts, as well as #5 in the U.K.