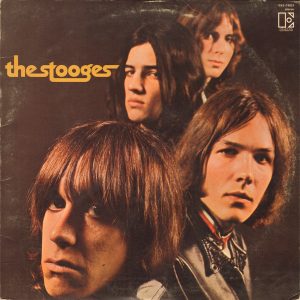 And it’s all right there in their debut single, the primally primeval “I Wanna Be Your Dog.” Opening with a Ron Asheton guitar splatter so fuzzy you need to clean your speaker, soon settles into its groove, after which Iggy submits these lyrics for your perusal.

The fact that Iggy yells all of this in a voice fraught with an almost matter-of-fact lust adds more than a bit of discomfort, and the chorus doubles down on that discomfort.

One of the more ominous things about “I Wanna Be Your Dog” is how the music doesn’t change a whit when they go into the chorus. The only thing that changes is Iggy’s vocals, the cool way he suddenly piles “now I wanna be your dog” on top of itself. Also adding to the proceedings, both the expected one-note piano from Producer (and ringer) John Cale, and the unexpected sleigh bells from Cale.

Which to me, makes “I Wanna Be Your Dog” a twisted Christmas song!! Merry Christmas!

Anyways, “I Wanna Be Your Dog” establishes its mood, and except for the builds before “come on!” it stays there. Even when Asheton decides to crank out a guitar solo, its at the end, and takes the song to its fade.

With the hindsight of a half-century, of course, we all see “I Wanna Be Your Dog” for both the amazing historical artifact that it now is, but also a punk song that still sounds great. But at the time, it was another story: “I Wanna Be Your Dog” didn’t chart, and The Stooges itself only made it to #106. And, contrary to what you might believe, it didn’t get great reviews at first, either, as all of its features were treated as bugs. Bugs crawling out of the speaker. Which, of course was the point.

“I Wanna Be Your Dog”