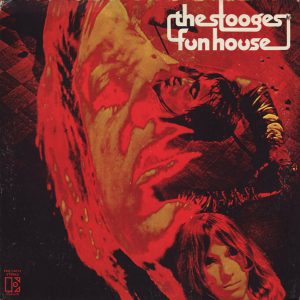 Now you might be asking yourself, “who is Don Gallucci?” How about the guy who played the fucking keyboard riff on “Louie Louie,” that’s who!! And so the Stooges and Gallucci tried to capture the band’s primal live sound by getting rid of all of the various sound-proofing equipment and just playing everything like they were playing concert: everything louder than everything else.

The resultant album was somehow both stripped-down and noisy as fuck, a molten mass of white-hot sound, over which Iggy did everything he could to get heard, like his opening scream of “Lorrrrrrrrrrrrrrrrrrrrrrrddd! WHOOOOOOOOOOOO!” that kicks off the proceedings.

Those screams are followed by a primo riff from guitarist Ron Asheton, while the rhythm section of Dave Alexander and Scott Asheton just fucking pound it out. Which is good, because that’s what “T.V. Eye” is all about.

I know, I know, you might have thought that “T.V. Eye” might be some kinda social commentary about how television corrupts the youth of the nation or some shit, but not so much. According to Legs McNeil and Gillian McCain’s seminal Please Kill Me: The Uncensored Oral History of Punk the phrase “T.V. Eye” came from the Asheton brothers’ sister to describe the female gaze. If they spotted a guy they liked, then it was their “twat vibe eye” they were using.

That’s why Iggy’s hooping and hollering so much: he’s gonna get laid!!!

That is, of course, if he could get around the crazed guitar the Asheton brothers’ sister’s brother Ron was kicking out over those screams, practically overpowering them in way that a lesser person than myself my describe as “rock blocking.”

Anyways, “T.V. Eye” wasn’t a single or anything, but it is an absolutely killer track from start to finish.