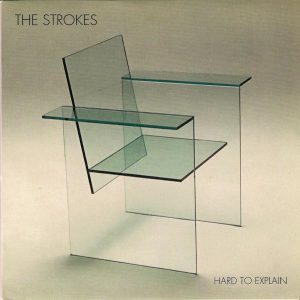 On the song that was the first single released from This Is It, producer Gordon Raphael compressed drummer Fabrizo Morettis drums so much that they sounded like a drum machine, which I guess begs the question why not use a real drum machine? But of course, the answer is in the question, and even if Moretti’s snare is almost fully lost, there is so much forward momentum in “Hard to Explain,” it almost doesn’t matter.

Said forward momentum rests entirely on the guitars of Nick Valensi and Albert Hammond, Jr, both of whom are alternating furiously strumming their guitars and playing hooky leads. So at first, it’s Hammond playing the leads that set up and swirl around the first couple of verses.

Then, on the pre-chorus, both guitarists are just bashing their guitars while bassist Nikolai Fraiture comes to the forefront — I mean, as much as you can hear the bass in Gordon Raphael’s treble-heavy production — as Julian Casablancas continues.

You can’t really hear it unless you want to, but Morretti does a nice double-time leading up to the longish chorus, as Valensi’s guitar sings the background harmonies with Casablancas, who has gone from laconic to rushed.

I missed the last bus, I’ll take the next train
I’ll try, but you see, it’s hard to explain
I say the right thing but act the wrong way
I like it right here, but I cannot stay
I’m watching TV, forget what I’m told
Well, I am too young and they are too old
The joke is on you, this place is a zoo
You’re right, it’s true

Valensi’s guitar totally makes that chorus: if he missed even a single note, the whole thing would fall apart, but, of course, everything was in it’s right place, right up to the way the song just suddenly ends after Casablancas sings “you’re right, it’s true.”

And then, after an uncomfortably long pause, which I’m sure radio station programmers and DJs hate, because it was well and truly dead air, “Hard to Explain” starts right back up, and basically does the same thing over again, just with slightly different lyrics, ending with with “I’ll try, but you see, it’s hard to explain”, once again probably pissing off radio stations — at least until the figured out how to segue another song after one that just fucking ends.

Which might have been the reason that “Hard to Explain” didn’t do as well as the later Is This It singles did in the U.S., only making it to #27 on the Alternative Airplay charts, though it didn make #16 on the U.K. singles charts.