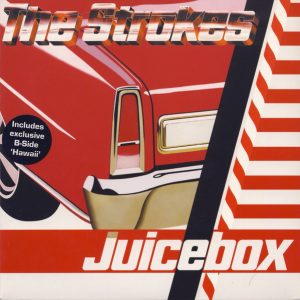 That said, because This is It got on alt-rock radio and never actually left, Room on Fire charted higher than Is This It, landing at #4 on the Billboard Album Charts, as did their third album, 2005’s First Impressions of Earth, which also had really strong standout track in the lead single “Juicebox.”

With new producer, David Kahne running them through his slickerizer, the grimy grit of Nick Valensi and Alber Hammond, Jr’s guitars got fuller, and Julian Casasblancas stopped singing through a 1960s transistor radio, and the result — at least on “Juicebox” — was a really fun multi-part rock ‘n’ roll song. And y’all know how much I love those.

And so “Juicebox” opened with those guitars — and Nikolai Fraiture’s bass — and playing kind of a sped-up up mutant variation of “The Peter Gunn Theme,” while drummer Fabrizo Moretti twirled on his hi-hat, all of it ever ascending as Casablanca spews the opening verse, getting more excited by the second.

This is immediately followed by big-ass power chords as Casablancas shreds his voice for the second part, screaming “Why don’t you come over here / We’ve got a city to love!,” which the falls into the chorus, with Valensi and Hammond, Jr playing around each other during the chorus.

After Casablancas’ screams of “you’re sooo colllllllllllldddddd”, Valensi takes off with a longish guitar solo, after which they do what they do: play the entire song over again, with slightly different lyrics.

Which is actually not entirely true, as during the outro, there are several iterations of “your so cold” with some cool guitars in between each one, until “Juicebox” crashes to its end.

I remember hearing this song all the time on KROQ in the mid-2000s, and realized almost instantly how much I really loved it, and I guess I wasn’t the only one, as “Juicebox” made it #9 on the U.S. alternative airplay chart, which was their best showing since “Last Nite,” and it was also their biggest pop hit ever, making it to #5 on the U.K. charts and #98 on the Billboard Hot 100, the only Strokes song to ever trouble the that chart. It all might have been helped by the video, featuring David Cross as a gross, clueless shock jock, or it might not have.