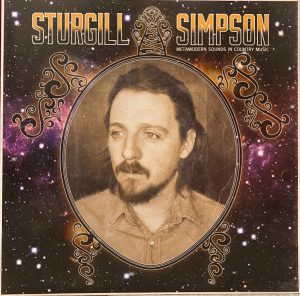 And while his first album, 2013’s High Top Mountain, definitely traded on Waylon’s outlaw country vibe, the follow-up, 2014’s Metamodern Sounds in Country Music was both album to take that vibe and create something both brand-new and ancient-sounding at the same time, especially on the opening track, “Turtles All The Way Down,” which opens with Simpson’s grand-dad intoning “Introducing metamodern sounds in country music” which drifts off into echo as Sturgill, framed just by a acoustic guitar, hi-hat and drum, starts singing.

At some point, an electric guitar comes in, as does a real drumbeat, as well as mellotron and trippy echoes, as befitting the trippy lyrics, sung matter-of-factly to an utterly gorgeous melody.

There’s a gateway in our minds
That leads somewhere out there, far beyond this plane
Where reptile aliens made of light
Cut you open and pull out all your pain
Tell me how you make illegal
Something that we all make in our brain
Some say you might go crazy
But then again it might make you go sane

“Turtles All The Way Down” is a philosophical drugs song, kinda Sturgill’s version of “The Seeker,” though that song is more about Townshend bugging other people, whereas this one is more about Sturgill bugging himself, before he comes to an inevitable conclusion.

Every time I take a look
Inside that old and fabled book
I’m blinded and reminded of
The pain caused by some old man in the sky
Marijuana, LSD
Psilocybin, and DMT
They all changed the way I see
But love’s the only thing that ever saved my life

Without getting too crazy, “Turtles All The Way Down” basically refers to a legend that a giant turtle is holding up the world. When asked what holds up the turtle, the answer is “another turtle . . . it’s turtles all the way down.” Or in a different way of looking at it: “repeat to yourself, it’s just a show, I should really just relax.” Which is basically what Simpson sings on the last verse.

With “Turtles All The Way Down” leading the way, Metamodern Sounds in Country Music was a small sensation, garnering rave reviews and making it to #8 on the Billboard Country Albums chart and #6 on their Independent Albums chart, as it was released on his own label.

“Turtles All The Way Down” Official Music Video


“Turtles All The Way Down” Acoustic Live in Nashville, 2014