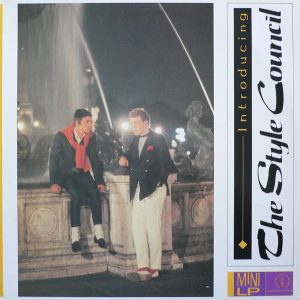 Paul Weller wasn’t one to rest on his laurels. After all, the final single by The Jam, the utterly tremendous “Beat Surrender” came out in November, 1982, and the first single by his new project, The Style Council — a collaboration with keyboardist Mick Talbot — the perfectly fine “Speak Like a Child” came out in March of 1983.

Of course, I was still trying to process the break-up of The Jam, who were — and are — one of my all-time favorite bands, and a band who was only getting better, as I think their final two albums, Sound Affects and The Gift are their best, as are the non-album singles that accompanied those records: the aformentioned “Beat Surrender,” but also “Funeral Pyre” and of course “Going Underground,” still one of the greatest songs anybody has ever done.

So this was where my head was at when Introducing The Style Council came out at the end of the long hot summer of 1983: still mourning The Jam, but at least willing to check out where Weller wanted to go next, just as I was willing to follow The Clash pretty much anywhere.

A compilation of their early singles that wasn’t even released in the U.K., Introducing The Style Council did exactly what it’s title was, and honestly, I was surprised that I liked it as much as I did. Obviously, Weller had been introducing soul music in the context of The Jam, but now freed from the shackles of that band’s history (and let’s face it, rhythm section), Introducing The Style Council wasn’t like any music Weller had previously done: even the most Jam-like track, “Speak Like a Child,” was full of synths. I also liked the slow jam “Long Hot Summer” (which I renamed in my head to “Long Hot Shower”) and the Talbot organ jworkout “Mick’s Up.” Nothing like a good organ workout, I always say.

But my favorite track was the simplest: “Headstart For Happiness,” which started with a Weller acoustic guitar and fingersnaps for percussion.

When I find you waiting hours; oh
You’re there to save my life for our obvious goal
We’ve got a headstart for happiness
For our part, guess we must be blessed
For this feeling to be so strong
Tell me is that so wrong?

I love how Weller sings “oh, oh, ohhhhhhhhhh” on the first line, and how clean it all sounds. Eventually Talbot comes in with a great-sounding organ riff as the finger snaps become handclaps, and the the whole thing sound like they basically made it up on the spot, as Talbot’s organ weaves in and out of the song, especially on the chorus.

Naive and wise with no sense of time
As I set my clock with a heart beat, tick tock
Violent and mild – common sense says I’m wild
With this mixed up fury, crazy beauty
It’s healthy to find all these feelings inside
As I get on my trek with a headstart back to you

What “Headstart For Happiness” showed was that, at the very least, Weller hadn’t run out of melodies that spoke to me, and while it was less musically dense than the rest of the record, it was at least an entry point for his music moving forward. Or so I thought. But, apparently, Weller didn’t think so, as they re-recorded it for the debut, adding drums and horns and backing vocalists, and listening to it now, it might actually objectively be better than the original version, but it’s the original that sends me back to 1983.